The Correctional Services Department (CSD) carried out an emergency exercise today (December 4) to test the emergency response of its various units to a simulated hostage-taking situation inside the Hei Ling Chau Correctional Institution (HLCI).

Code-named Concord XIV, the four-hour exercise aimed to test the department's emergency command and communication capabilities, the implementation of contingency plans at different levels, as well as departmental response and information dissemination in extreme weather conditions.

The Hong Kong Police Force (HKPF), the Fire Services Department (FSD) and the Government Flying Service (GFS) also participated in the exercise to test the CSD's co-ordination with these departments when requests for assistance and logistics support were made from correctional institutions in the area.

The exercise featured a number of different incidents including medical emergencies, hostage-taking and fire breakouts.

More than 200 staff members of the CSD, the HKPF, the FSD and the GFS took part in the exercise.

Mr Kan said the exercise provided an opportunity for the department to test the readiness of its emergency response and evaluate its co-ordination and co-operation with relevant parties.

He said the exercise would enhance the response capabilities and professionalism of colleagues to improve inter-departmental communications and boost their capabilities and efficiency in handling emergency crisis and ad-hoc incidents.

The CSD holds regular emergency exercises of various types in correctional institutions and at regional and departmental levels to enable staff members to become familiar with handling different incidents. The objective is to provide a safe and stable custodial environment to facilitate rehabilitation and help maintain Hong Kong as one of the safest cities in the world. 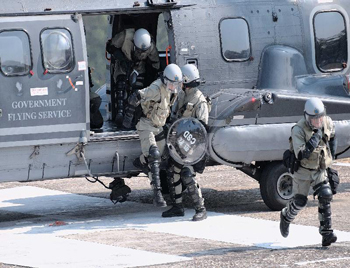 The Correctional Services Department (CSD) carried out an emergency exercise, Concord XIV, to test the emergency response of its various units by way of a simulated hostage-taking situation inside the Hei Ling Chau Correctional Institution today (December 4). Photo shows a CSD Emergency Response Team landing on Hei Ling Chau with the assistance of the Government Flying Service to participate in the exercise.

Members of the Emergency Response Team successfully save the hostages (left).