The 27 correctional facilities under the Correctional Services Department (CSD) held various types of thank-you activities for the first time today (December 6) to let persons in custody express their gratitude towards personnel and volunteers of the non-governmental organisations (NGOs) which have been co-operating with the department for a long time.

Among the institutions, Stanley Prison held a "Beloved and Beholden" activity for persons in custody to present thank-you notes to the personnel and volunteers of the NGOs. They also presented drama and singing performances to give thanks to the volunteers for their dedication.

The Commissioner of Correctional Services, Mr Sin Yat-kin, thanked the NGOs for their care, dedication and contributions, which have greatly enhanced the determination of persons in custody to rehabilitate. He called for concerted efforts by all parties to support rehabilitation work and make the community safer and more harmonious.

They added that, through the contribution made by the volunteers, they could recognise the care of and acceptance by others, thus generating the impetus to rehabilitate. They said they hope that the willingness to accept rehabilitated persons could be extended to all sectors of the community so that the public could have more understanding about rehabilitated persons and help them reintegrate into the society.

So far, there are more than 80 NGOs which have a close working relationship with the CSD and provide diversified services for persons in custody and rehabilitated persons. These services include group counselling, major activities during festivals, interests classes and cultural activities.

She said, "Athletes make progress with relentless practice, sweat and tears. Though persons in custody have committed offences, they can rehabilitate themselves through hard effort and perseverance. I would appeal to the community to give another chance to rehabilitated persons and support the rehabilitation work of the CSD and NGOs."

Veteran performing artist Mr James Mark, who has lent much support to the CSD's rehabilitation work, directed the drama "Metropolis", performed by the persons in custody under the "Creation and Rehabilitation" project. He said, "The drama features alienation and indifference among people in modern-day life. It, in effect, emphasises the importance of love and care, which are conducive to the reintegration of rehabilitated persons into society. I hope that, in real life, people can give a chance to rehabilitated persons to turn over a new leaf."

The Chief Executive of the Lay Prison Evangelical Organization of the Catholic Diocese of Hong Kong, Mr Daniel Cheung, who has been leading the "Creation and Rehabilitation" project, also affirmed the contribution made by NGOs in rehabilitation work. He said, "Community support forms an essential element in the success of rehabilitation as well as a pillar in building a safer and more inclusive society."

Apart from the CSD Rehabilitation Ambassador, Miss Tsai, and more than 100 personnel and volunteers of NGOs, the Chairman of the Prisoners' Education Trust Fund Committee and Legislative Council member, Dr Lam Tai-fai, as well as representatives of various sectors also took part in the activities today 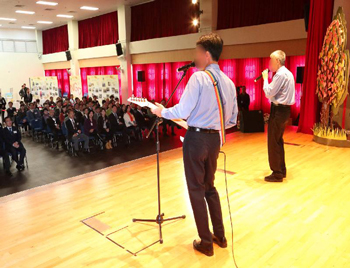 The 27 correctional institutions and facilities under the Correctional Services Department held various types of thank-you activities for the first time today (December 6) to express their gratitude towards personnel and volunteers of the non-governmental organisations (NGOs) which have been co-operating with the department for a long time. Picture shows members of the Stanley Prison Band giving a singing performance to show their gratitude to the NGOs. 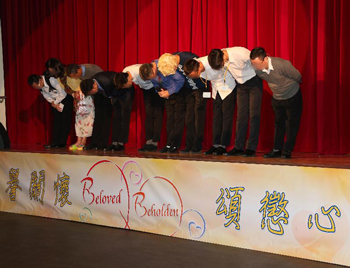 Ten persons in custody thank NGOs for their support after presenting their play.