He said, "Although there was only a slight decrease in the average daily penal population for the whole year, we witnessed a decline in the number of persons in custody in the second half of 2013. At the end of 2012, the penal population was 9 297, but it dropped to 9 093 at the end of last year, representing a decrease of 2.8 per cent.

We are proactively implementing redevelopment and improvement works to ensure that the correctional facilities can meet modern-day needs. For example, the partial redevelopment project currently under way at the Tai Lam Centre for Women will not only provide 108 additional penal places upon completion, but also enhance existing facilities including those catering for high security risk female persons in custody. The project is scheduled for completion in 2016."

Regarding acts of violence and indiscipline in prisons as well as self-harm behaviour, Mr Sin said the CSD places dual emphasis on custodial and rehabilitative services. Discipline and order are of paramount importance to correctional institutions, enabling persons in custody to have a regular living pattern with an organised schedule for work and rest in a secure custodial environment. It allows them to reflect deeply, strengthen their determination to start afresh and plan how to fully utilise their time while serving their sentence, so that they can better equip themselves for reintegration into society upon discharge and turn over a new leaf, he said.

To strengthen the security of penal institutions and prevent the smuggling of drugs by concealment inside the body, he said the first low-radiation X-ray body scanner was put into full use at Lai Chi Kok Reception Centre in early 2013 to replace the previous practice of manual rectal searches. After the new equipment was put into operation, the number of seizures of dangerous drugs in penal institutions was 95 last year, representing a significant decrease of 40 per cent when compared to the 158 seizures in the previous year.

There were 67 cases of drugs being concealed inside the body in 2013, representing a significant decrease of 41 per cent over the previous year, and most of them were detected by the X-ray body scanner. As the X-ray body scanner has proved to be highly effective and has also achieved a deterrent effect, the CSD plans to install this security equipment at three institutions, namely Tai Lam Centre for Women, Lo Wu Correctional Institution and Pik Uk Correctional Institution.

Furthermore, in the past year, the department has introduced a human presence detection system and a closed circuit television system equipped with a video analytical function into penal institutions, in order to strengthen the security facilities for the prevention of escape and to assist the correctional officers in executing their duties more effectively. The department will continue to review the effectiveness of the systems and explore the feasibility of installing them in other institutions by phases.

Last year, the department continued to promote rehabilitation work. With the active encouragement of correctional officers, over 900 adult persons in custody  enrolled in part-time academic courses last year and some of them have even achieved bachelor's degrees.

Mr Sin said that this year the CSD will continue to provide more vocational training courses on trades with a heavy market demand, such as the Professional Taxi Driver Training (Taxi Written Test), Metalwork and Welding Craft Training, Computer Aided Drafting Course, Computer Multi-media Productions and Programming Training. These training courses will help persons in custody equip themselves with vocational skills, thereby facilitating their smooth reintegration into society upon release.

The department introduced the first "Waste No Food Scheme" at Lo Wu Correctional Institution last year. Since the implementation of the Scheme, the response has been very encouraging. The participation rate increased from 50 per cent at the start to 80 per cent recently, equivalent to about 950 persons. In the first 11 months after launching the Scheme, LWCI had achieved an accumulative saving of about 16 000 kilograms of rice, 460 kilograms of potatoes and 90 kilograms of wheat flour. Taking rice as an example, the saving is equivalent to 3 200 family-size packs (5 kilograms each) of rice.

In view of the favourable response to the Scheme, the CSD has already extended it to Ma Hang Prison and Nei Kwu Correctional Institution.

On human resources, Mr Sin said staff members are regarded as the department's most important asset, and this is why the CSD has always allocated resources for their benefit. The CSD  also proactively encourages staff to adopt a balanced and healthy life style, improve the professionalism and excellence of their services, and continue to further foster the department's culture of integrity and probity.

To promote anti-crime awareness, enhance understanding of the detrimental effects of drugs and disseminate the message of supporting offender rehabilitation among young people, the department implemented the Rehabilitation Pioneer Project five years ago. Recently new elements have been introduced, including organising a drama and music performance under the title "Creation and Rehabilitation". Last year, and for the first time, some 300 secondary school students were invited to attend a drama performance inside a maximum security prison. The drama was created, directed and performed by persons in custody who have committed serious crimes.

The persons in custody also took part in interactive discussions with the students and shared their experience regarding the serious consequences of committing crimes. Judging by the positive feedback from the participating students, the event's objectives were achieved. This year, the CSD will continue to enhance the project and organise activities related to moral and civic education for the young generation.

Mr Sin concluded, "The department went through a busy year in 2013, and 2014 will undoubtedly be another year full of challenges. In the coming year, my colleagues and I will continue to do our utmost to serve the community with dedication and commitment for the stability of Hong Kong." 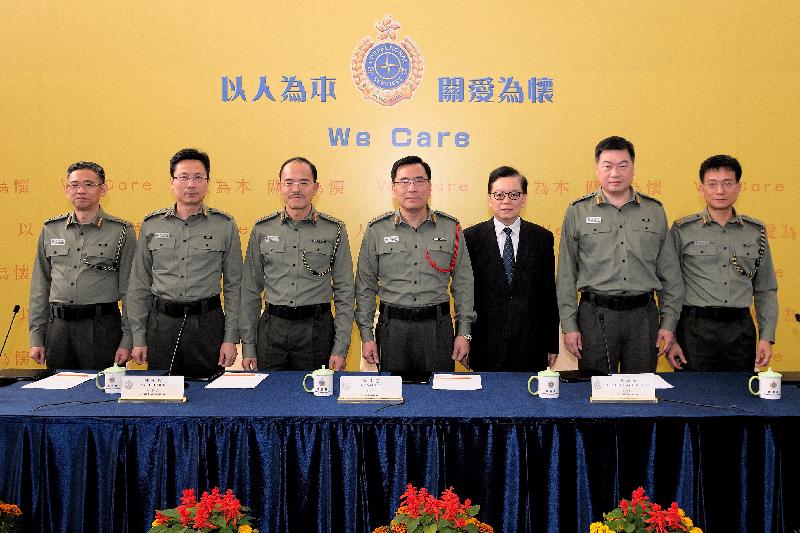 The Commissioner of Correctional Services, Mr Sin Yat-kin (centre), today (March 19) leads directorate officers to brief the media on the Department's work over the past year and the year ahead. 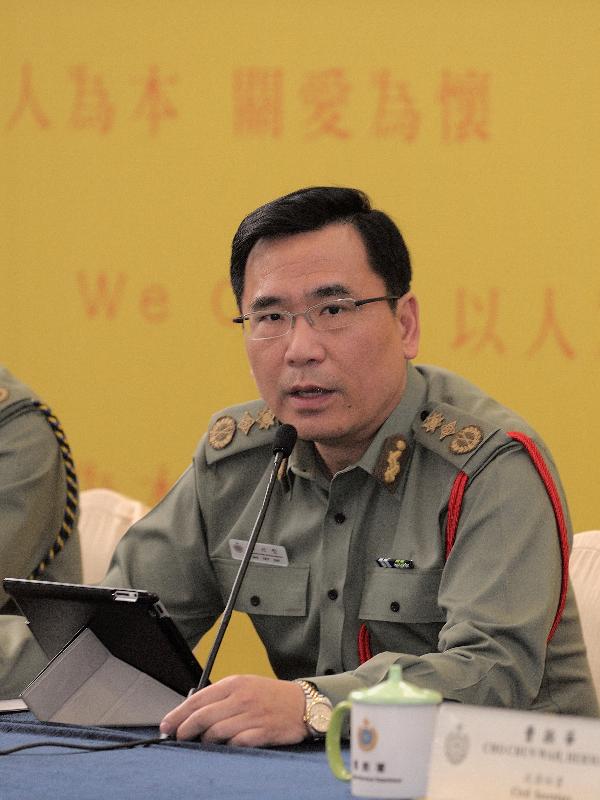 Mr Sin said that the stable penal population over the past few years has helped ensure the smooth operation of correctional facilities.