One hundred and nineteen persons in custody at Lo Wu Correctional Institution (LWCI) were presented with certificates at a ceremony today (March 19) in recognition of their continuous efforts to pursue further studies.

In 2013, 204 persons in custody at LWCI passed 221 papers in various academic courses and public examinations. Today's 119 awardees passed 158 papers, among which they achieved 74 distinctions and credits.

Officiating at the ceremony, the President of the Care of Rehabilitated Offenders Association (CROA), Ms Wendy Wan, said she is highly supportive of the Correctional Services Department (CSD)'s diverse and sustainable rehabilitation work. She also expressed her appreciation for the tailor-made and practical courses provided by LWCI, which has laid a solid foundation for reintegrating rehabilitated offenders into society.

At the ceremony, a representative of persons in custody and her family member shared their experience of advancing towards rehabilitation together. The pair spoke on the advantages of the department's diverse rehabilitation work, as well as the importance of family and public support for rehabilitated offenders. With the guidance of a part-time instructor of the Hong Kong Repertory Theatre, Miss Grace Cheng, and a volunteer from the Christian Prison Pastoral Association Limited, Mr Peter Fung, persons in custody at LWCI staged a drama entitled "Our Dreams Come True" to share their aspirations to reintegrate into society and lead a new life.

A band named Reborn formed by persons in custody at LWCI sang the song "Spread Wings for Me". The lyrics were rewritten by a rehabilitated person discharged from LWCI and depict the hope and determination to start anew. A celebrity, Dicky Cheung, also encouraged persons in custody not to commit crimes again and urged them to continue their studies to equip themselves with skills to reintegrate into society. He also appealed for public support for rehabilitated offenders.

The CSD has long been providing a favourable environment that encourages adult persons in custody to pursue studies after work. To prepare rehabilitated offenders for their return to the community, LWCI provides courses for them to acquire work-related training and recognition. The department also helps them attain job-relevant accreditation by applying through the Recognition of Prior Learning Mechanism in accordance with their working knowledge, skills and experience. Those who have financial difficulties may apply for education subsidy.

Also attending the ceremony were the Commissioner of Correctional Services, Mr Sin Yat-kin; representatives of community organisations; community leaders; and families of persons in custody. 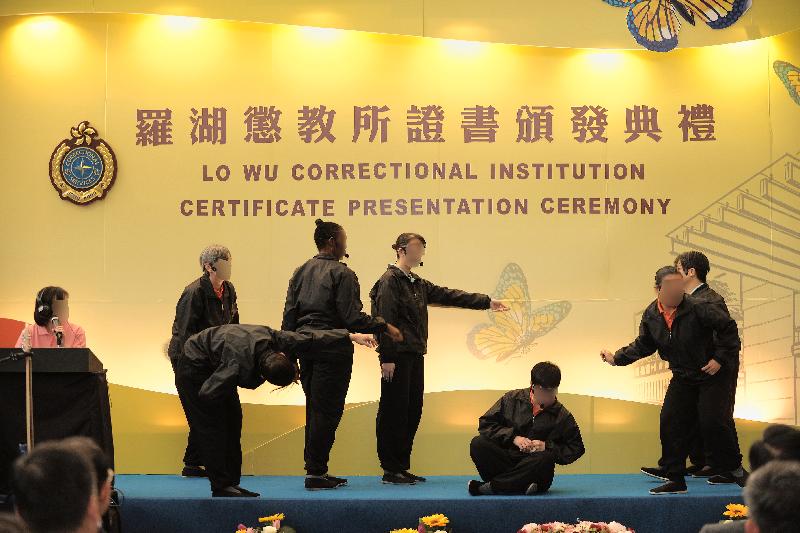 Persons in custody stage a drama titled "Our Dreams Come True" to spread positive messages at the ceremony.

Members of Reborn, a band formed by persons in custody, sing "Spread Wings for Me", which was written by a rehabilitated person discharged from LWCI. 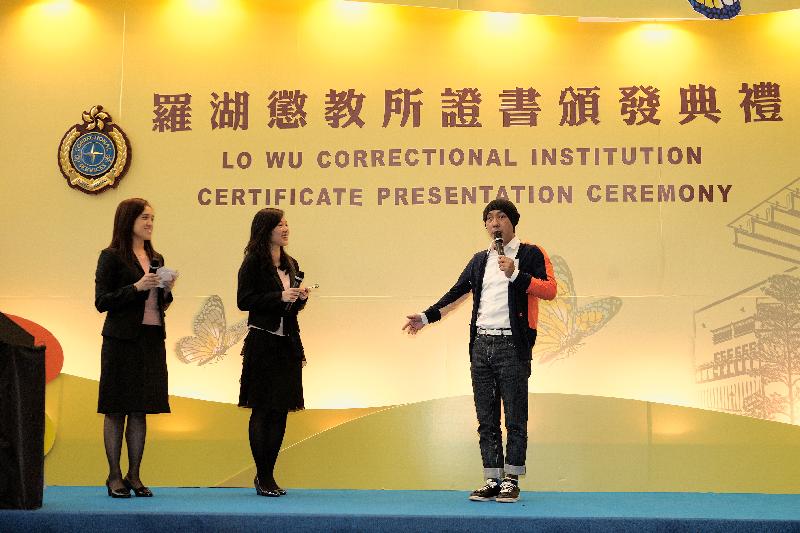 A celebrity, Mr Dicky Cheung (first right), encourages persons in custody not to re-commit crimes and appeals for public support for rehabilitated offenders.