As highlighted by the visual effect of a colour spectrum made through prisms during the launch ceremony, the Symposium made reference to the wording of this year's Policy Address to "unleash potential" as a metaphor for opening up all sectors of the community as potential sources of employment for offenders, as well as unleashing the potential of rehabilitated offenders on their rehabilitation path to become productive citizens and contribute toward a better society.

"Rehabilitated offenders need an enormous amount of courage and community support to stand strong on the path of rehabilitation. It is pivotal for them to have a stable job and be given a job opportunity," said the President of the Chinese Manufacturers' Association of Hong Kong (CMA), Mr Irons Sze, in his welcoming speech.

He noted that rehabilitation services and social development are closely knit, adding that rehabilitated offenders who have received diverse and market-oriented vocational training are ready for employers to give them a chance to help their reintegration into society and unleash their potential.

The Director of HKU's Centre for Criminology, Professor Karen Laidler, thanked all employers present at the Symposium for their care and continuous support for rehabilitated offenders by offering jobs to them after release.

"Employers can play an important role in the reintegration process for those who need an opportunity to overcome their past problems and become productive members of society. Offender rehabilitation is a collective effort for all of us," she said.

At the Symposium, academics, business persons and employers from various fields exchanged views on the importance of work for rehabilitated offenders and their experience in hiring them, the role of the CSD in helping them to find employment, and the role of CSD supervision staff in matching them with employers. Two young rehabilitated offenders under statutory supervision talked about their path to rehabilitation and the ups and downs they experienced, while six persons in custody from Cape Collinson Correctional Institution undergoing food and beverage service training also served guests at the luncheon.

To assist persons in custody to seek job opportunities, a job fair will be jointly organised by the CSD, the CMA and the MSROC later this year.

The Commissioner of Correctional Services, Mr Sin Yat-kin (second right), together with other guests, launched the "Unleashing Rehabilitated Offenders' Potential" Employment Symposium today (June 25). The visual effect of a colourful spectrum made through prisms at the launch ceremony presented a metaphor for opening up all sectors of the community as potential sources of employment for offenders, as well as unleashing the potential of rehabilitated offenders on their rehabilitation path to become productive citizens and contribute toward a better society. 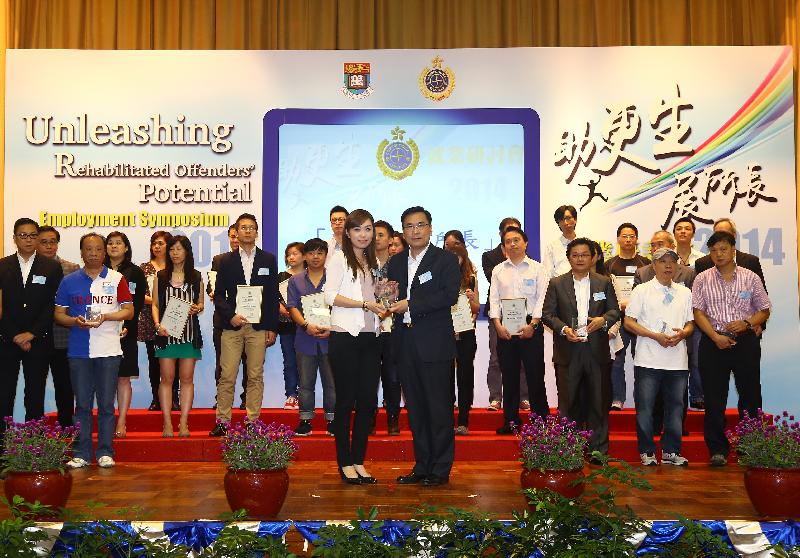 Mr Sin presents a gold award to a representative of a company to show appreciation for the company's support for rehabilitation work. 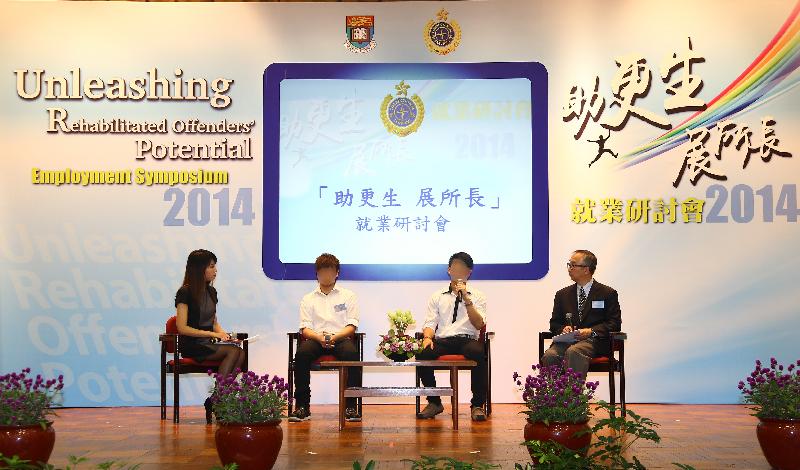 Two rehabilitated offenders (second and third left) talk about their transition back to society, including the ups and downs they experienced, and their career advancement and recognition through hard work.