The Correctional Services Department (CSD) jointly held the Job Fair for Rehabilitated Offenders 2014 for persons in custody today (September 26) with the Chinese Manufacturers' Association of Hong Kong (CMA) and Merchants Support for Rehabilitated Offenders Committee Limited. During the event, employers gathered in one place and conducted interviews with persons in custody in correctional institutions via computer video conferencing technology for the first time.

The job fair provided a platform for persons in custody who will be released soon to look for jobs, thus helping them to reintegrate into society quickly after release.

Speaking at the opening ceremony of the job fair, the Secretary for Security, Mr Lai Tung-kwok, said the CSD, with the support of various training bodies such as the Employees Retraining Board, the Construction Industry Council and the Vocational Training Council, provides a range of market-oriented courses for persons in custody in areas including construction, food and beverage, retailing and beauty care. This is to allow persons in custody to equip themselves with new skills for reintegration into the community.

Mr Lai said rehabilitated offenders need strong determination and courage, coupled with the acceptance and support of the community, to embark on the road to rehabilitation. Steady jobs and employment opportunities are crucial to fostering their determination to turn over a new leaf.

Mr Lai said the Administration has all along been encouraging employers to give rehabilitated offenders job opportunities and provides a platform for potential employers to join the ranks of caring employers who offer jobs to soon-to-be-released persons in custody.

The Executive Chairman of Merchants Support for Rehabilitated Offenders Committee Limited, Dr Ho Wai-kuen, said the video conferencing job fair was organised to address rehabilitated offenders' urgent needs to seek employment for their smooth reintegration into society. The job fair could help them to overcome difficulties with job hunting by assisting them to find jobs prior to their release, and thus earn a living for themselves for easier reintegration. The rehabilitated offenders would hence have a positive self-image in front of their families and friends and could become law-abiding citizens.

More than 400 persons in custody from 21 institutions applied for these jobs today.

To encourage persons in custody to participate in this job fair, posters and information about job vacancies were displayed in penal institutions for reference and the job fair was promoted through a radio programme. In addition, the CSD organised courses on interview skills for persons in custody to prepare themselves to attend interviews. 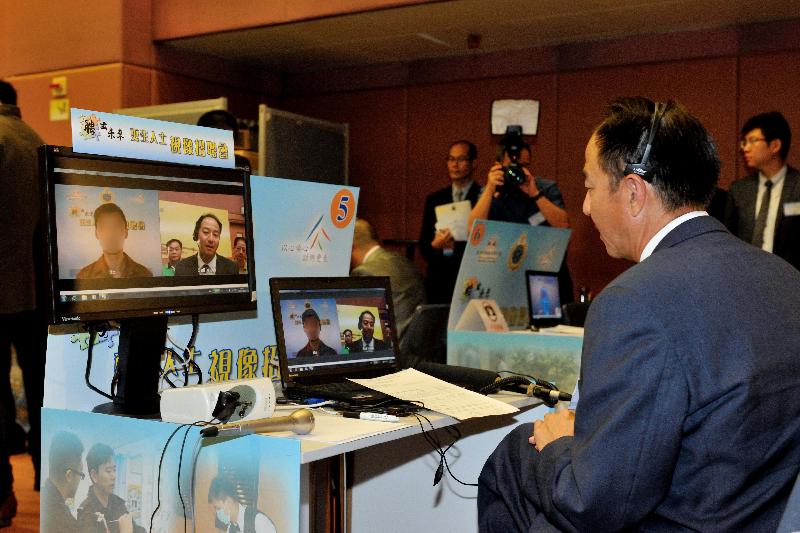 Employers conduct interviews with persons in custody in correctional institutions via computer video conferencing technology for the first time at the Job Fair for Rehabilitated Offenders 2014.