More than 500 secondary students, teachers and social workers from 13 schools are taking part in a student forum organised by the Correctional Services Department (CSD) under the Rehabilitation Pioneer Project (RPP) at Youth Square in Chai Wan today (October 29).

Involving a theatre format, the forum also features a sharing session by rehabilitated offenders to assist the students in exploring the problems facing rehabilitated persons when they re-integrate into society.

Officiating at the forum, the Secretary for Education, Mr Eddie Ng Hak-kim, said the aim of education is to promote students' whole-person development and lifelong learning capabilities. Education helps to unleash human potential and enhance individual qualities. He said that the objective of the school-based Healthy School Policy is to strengthen students' anti-drug knowledge, develop their healthy lifestyles, enhance positive attitudes and values towards life, increase students' ability to resist drug abuse and promote preventive education against taking drugs.

Mr Ng said all these match the RPP's important messages of leading a law-abiding and drug-free life and supporting the rehabilitation of offenders. He said he hoped the students would enjoy participating in this activity and spread the message to every corner of Hong Kong, so that everyone can work together towards building a secure and harmonious society.

The forum featured a drama performed by Hong Kong Repertory Theatre about the experience of a rehabilitated offender who went astray and later re-integrated into society. The drama also showed how a youngster resisted drug temptation. The director and host of the forum invited the students to take part in discussion during the drama performance to strengthen the interactive effect. The students also took part in role play as rehabilitated offenders to better understand the dire consequences of taking drugs and committing crimes, as well as the difficulties and struggles involved. It was also hoped that the role play would help them learn the importance of making the right decisions and understand the significance of rehabilitation, and encourage them to support rehabilitated offenders in re-integrating into the community.

During the sharing session, rehabilitated persons talked about the high price they have paid for committing crime and the process of rehabilitation. It also reinforced the message of abiding by the law.

The Chairman of Tung Wah Group of Hospitals, Mr Ivan Sze, said his group stresses whole-person education to nurture the character of youngsters and help students develop positive attitudes and values. He added that through the RPP, young people can understand the harmful effects of taking drugs and committing crime so they will stay away from drugs and learn to live within the law. He appealed to the students to promote the message of supporting rehabilitation among their peer groups after the forum.

Participating students said the theatre format helped them better understand the serious consequences of taking drugs. They also said the seminar would enable them to make right decision when facing temptation in future, as well as to be considerate and inclusive towards rehabilitated offenders.

Assistant Commissioner of Correctional Services (Rehabilitation), Mr Woo Ying-ming, said youth crime and young drug abusers are a main concern of the community. Since the launch of the RPP in 2008, the student forum has played an important role, he added.

In order to expand the project to students of different levels, the CSD refines it regularly by injecting new elements such as extended training camps, a music and drama performance under the Creation and Rehabilitation Programme, and by arranging for education workers to take part in the Personal Encounter with Prisoners Scheme.

The department hopes to spread the messages of leading a law-abiding and drug-free life and supporting the rehabilitation offenders through diverse community education services.

More than 450 secondary students, teachers and social workers from six Po Leung Kuk schools will take part in another student forum organised by the CSD under the Rehabilitation Pioneer Project at Youth Square in Chai Wan tomorrow (October 30). 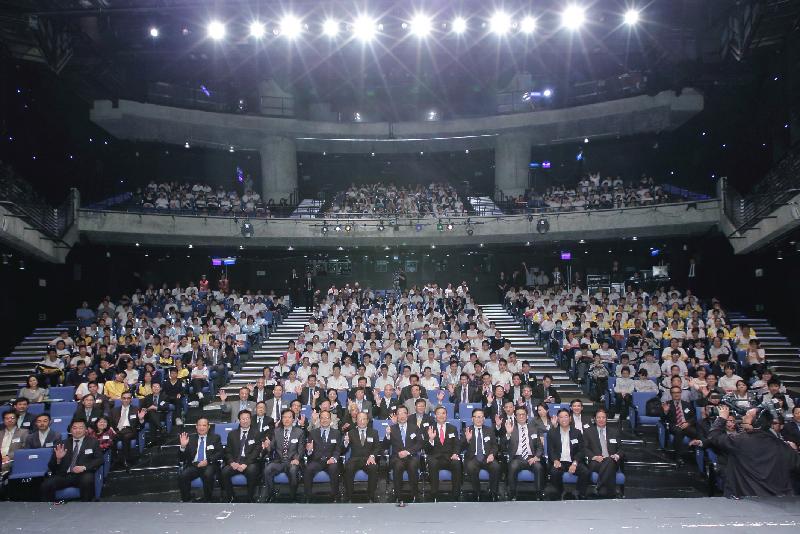 More than 500 secondary students, teachers and social workers from 13 schools took part in a student forum organised by the Correctional Services Department under the Rehabilitation Pioneer Project at Youth Square in Chai Wan today (October 29).

The Secretary for Education, Mr Eddie Ng Hak-kim, said the aim of education is to promote students whole-person development, which matches the Rehabilitation Pioneer Projects important messages of leading a law-abiding and drug-free life and supporting the rehabilitation of offenders. 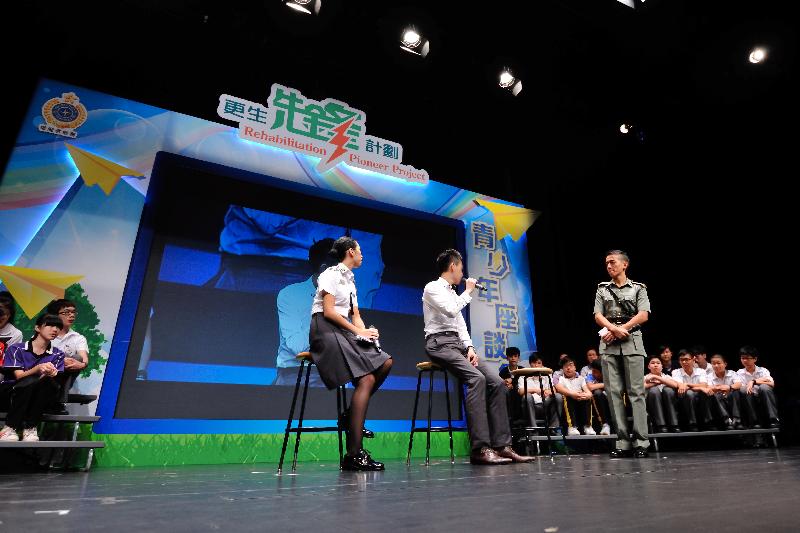 A rehabilitated person (centre) talks about the high price he paid for committing crime and the process of rehabilitation during the sharing session, which also reinforced the message of abiding by the law.

Students take part in a role play as rehabilitated offenders.