A total of 129 persons in custody (PICs) in Shek Pik Prison (SPP) were presented with certificates in recognition of their academic achievements at a ceremony today (November 19).

The 129 PICs had passed 206 papers with 116 distinctions and credits, achieving a total of 415 university credit points. One PIC who attained good academic results was rewarded with an Outstanding Student Award of the Year by the Open University of Hong Kong (OUHK), while four PICs were awarded a Bachelor Degree of Business Administration, a Bachelor Degree of Language and Translation, an Associate Degree of Business Administration and an Associate Degree of General Studies by OUHK respectively.

So far this year, a total of 260 PICs at SPP have passed 418 papers through various distance learning courses and public examinations run by the OUHK, the Hong Kong Examinations and Assessment Authority, the City and Guilds International Limited, the London Chamber of Commerce and Industry International Qualifications.

Speaking at the certificate presentation ceremony, the President of Buddha's Light International Association of Hong Kong Ltd, Ms Cally Kwong, praised the PICs for their remarkable academic attainments. She said that although the PICs lost their freedom, they could have disciplined lifestyle for self-reflection under the custody and facilitation of Correctional Services Department (CSD).

She also encouraged the PICs to learn to respect: to respect lives - no killing but to protect lives; to respect property right - no stealing but to donate; to respect chastity - no molesting others' bodies but to observe moral standard; to respect others' feelings - no slandering others but to say good words; to respect physical health - no drug abusing but to develop healthy lifestyle. PICs should seize the day and get along well with others.

During the ceremony, a PICs representative had a talk with Rehabilitation Angel, Ms Vivian Yip, sharing details about his journey towards rehabilitation and showing repentance to his family members. A PICs band at SPP called Strivers then joined MedArt volunteers and institutional correctional officers for a music performance, in which they sang to express their appreciation for the support of their families, correctional officers and society members as well as their determination to improve their lives.

Also attending the ceremony were the Commissioner of Correctional Services, Mr Sin Yat-kin, representatives of non-governmental and community organisations, community leaders and families of the inmates. 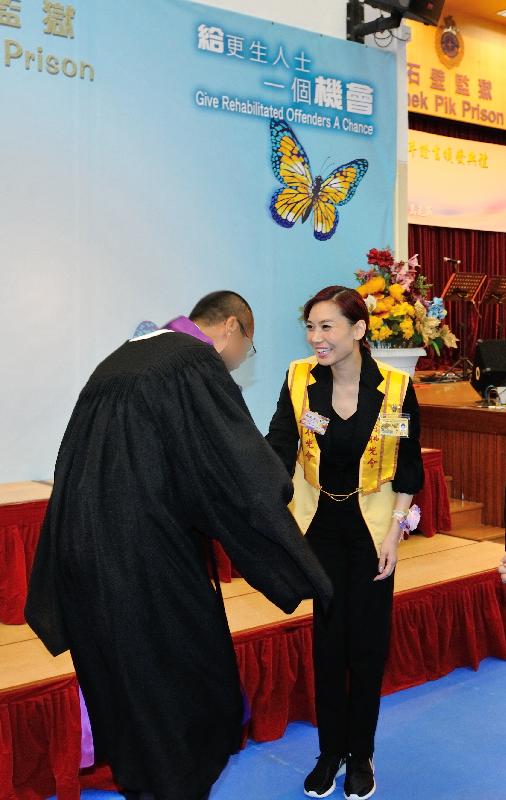 A total of 129 persons in custody at Shek Pik Prison were presented with certificates in recognition of their academic achievements at a ceremony today (November 19). The President of Buddha's Light International Association of Hong Kong Ltd , Ms Cally Kwong (right), is pictured presenting a certificate to a person in custody. 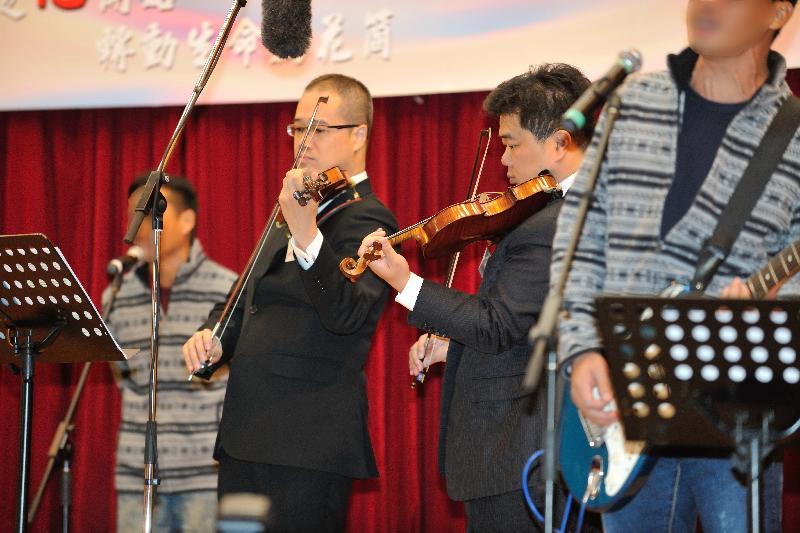 The Shek Pik Prison band Strivers, which is formed by persons in custody, is joined by MedArt volunteers and institutional correctional officers on stage. The band members sang to express their appreciation for the support of their families, correctional officers and society members as well as their determination to improve their lives.