In terms of the backgrounds of the penal population as at the end of 2014, 72.5 per cent of persons in custody were local, 12.2 per cent were from the Mainland, Taiwan and Macau, and 15.3 per cent were from other countries. The above percentages were similar to those of the previous year.

He said, "Last year, 106 high security risk persons in custody were newly admitted into our correctional facilities. Among them, 81.1 per cent had committed serious drug-related offences and 32.1 per cent came from other countries. Again, the percentages were similar to those in the past few years.

"Reflecting the ageing population in Hong Kong, the penal population has also witnessed a growing number of persons in custody aged 65 or above over the past decade."

He pointed out that a total of 340 persons aged 65 or above were sentenced and admitted into correctional facilities in 2014, representing an increase of 81.8 per cent from the figure of 187 persons in 2005. According to the latest projection on the daily average penal population, the proportion of persons in custody aged 65 or above will rise from approximately 2 per cent in 2015 (around 170 persons) to approximately 5 per cent in 2023 (around 410 persons).

He added, "In order to provide suitable custodial and rehabilitation arrangements for elderly persons in custody and to better utilise correctional facilities, the CSD initiated a facility improvement project in Tai Lam Correctional Institution in mid-2013. Following completion of the project in late 2014, all elderly persons in custody at Ma Hang Prison were relocated to Tai Lam Correctional Institution in late January."

On safe custody, Mr Yau said that there were 3 592 cases of persons in custody violating prison discipline in 2014, representing an increase of 10 per cent from the previous year. There were 567 cases of acts of violence in 2014 which mainly involved fighting among persons in custody and assaults, representing an increase of 18.9 per cent from the previous year. The increase in disciplinary and acts of violence cases precisely reflects the challenges and pressure encountered by correctional officers. Without the early detection and intervention of staff and imposition of appropriate punishment on those persons in custody involved in disciplinary offences and acts of violence, the situation could have easily deteriorated. This will certainly have serious implications on the order and operation of correctional facilities and even the safety of the stakeholders concerned.

On rehabilitation work, Mr Yau said the department continues to provide opportunities and assistance to persons in custody by equipping them with useful job and life skills, providing education as well as building up their self-confidence, thereby helping them to start a new life upon release. In addition, the CSD has been working closely with some 80 non-governmental organisations (NGOs) to implement diversified and appropriate rehabilitation programmes and initiatives to assist persons in custody in turning over a new leaf.

In respect of vocational training, 16 training courses are provided to young persons in custody and 38 market-oriented vocational training courses are available for adult persons in custody who are due for discharge within three to 24 months. The Bar-bending and Fixing Skill Course, the Timber Formwork Skill Course, Travel Agent Assistant Course, Professional Taxi Driver Training (Taxi Written Test) and Care Worker Training have been newly added in recent years.

On promoting rehabilitation work in the community in 2014, the CSD held various ongoing publicity initiatives including district-based publicity activities co-organised with the 18 District Fight Crime Committees, Thank You NGO Week, the NGO Forum, and the Award Presentation Ceremony for Volunteers of CSD Rehabilitation Volunteer Group.

Expanding on community education, Mr Yau said that the CSD will focus on disseminating to students and young people the important messages of leading a law-abiding and drug-free life as well as supporting offender rehabilitation under the Rehabilitation Pioneer Project. Last year, more than 25 000 students participated in various activities under the Project.

In regard to measures concerning the health of persons in custody, Pak Sha Wan Correctional Institution was designated as the second "No Smoking Correctional Facility" on December 1, 2014, to house adult male non-smoking recidivists.

After the press conference, media representatives toured the newly established Evergreen Garden at Tai Lam Correctional Institution, in which an integrated correctional programme has been implemented to help elderly persons in custody to build a positive and healthy life.

On rehabilitation programmes, the CSD co-organises with NGOs and outside organisations the provision of suitable hobby classes, including tai chi, calligraphy and horticulture. Appropriate welfare and pre-release reintegration support arrangements are also provided for elderly persons in custody.

In addition, the programmes also take care of the psychological health of elderly persons in custody by providing psychological counselling, psychoeducation and geriatric psychotherapy treatment.

Regarding vocational training for elderly persons in custody, the CSD and the Employees Retraining Board jointly organise a Horticulture Assistant Certificate Course for voluntary participation, thereby enabling these persons to acquire horticultural skills and knowledge, and refining their temperament at the same time.

The CSD also introduced today a new information technology initiative, the departmental Mobile App, to enhance the communication between the department and the general public. The new Mobile App provides easy and instant access to important and updated information of the CSD anytime and anywhere. Such information includes the location of and recommended public transport access to every correctional facility, information for registered visitors regarding the assigned institution of an individual person in custody and whether a visit can be made, and job vacancies of the CSD. 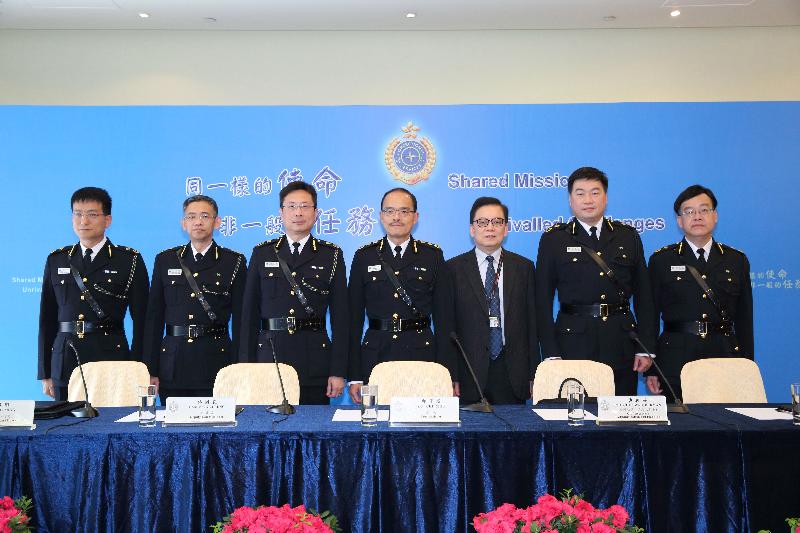 The Commissioner of Correctional Services, Mr Yau Chi-chiu (centre), today (February 16) leads directorate officers to brief the media on the Department's work over the past year and the year ahead. 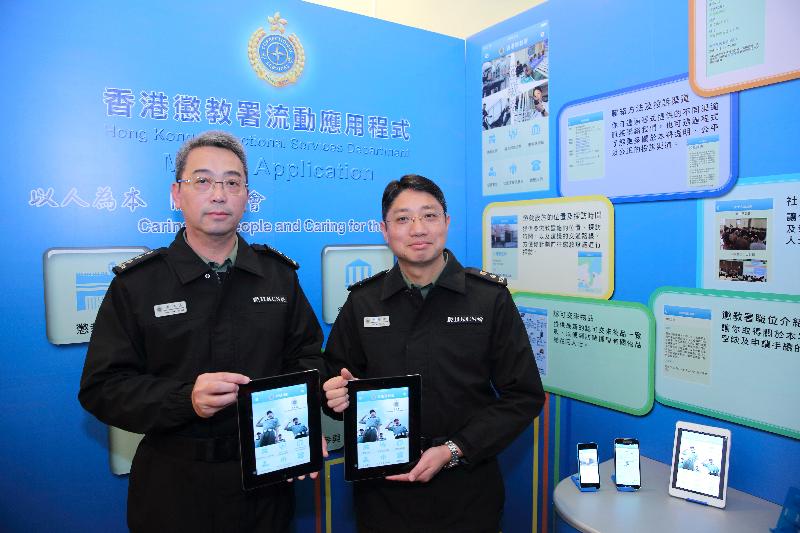 The CSD also introduced today a new information technology initiative, the departmental Mobile App. The app provides the location of and recommended public transport access to every correctional facility, information for registered visitors regarding the assigned institution of an individual person in custody and whether a visit can be made, and job vacancies of the CSD. 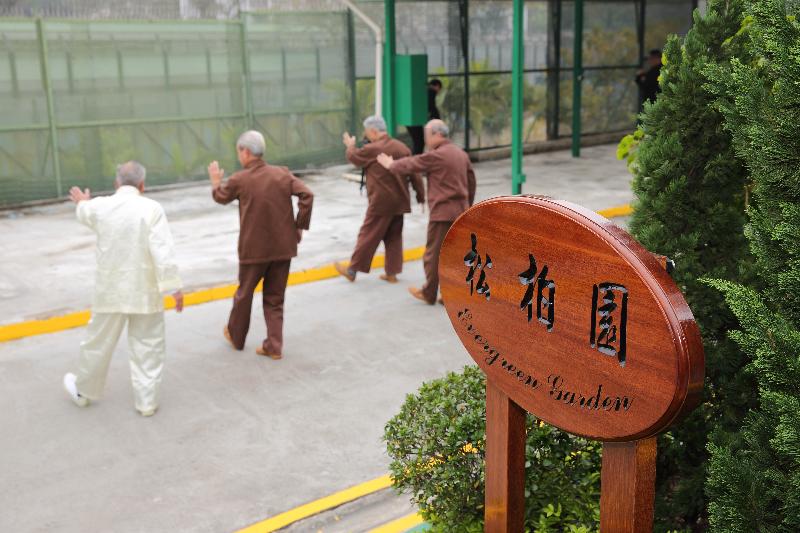 An Evergreen Garden has been newly established at Tai Lam Correctional Institution, in which an integrated correctional programme has been implemented for elderly persons in custody, including the provision of suitable hobby classes, including tai chi and horticulture. 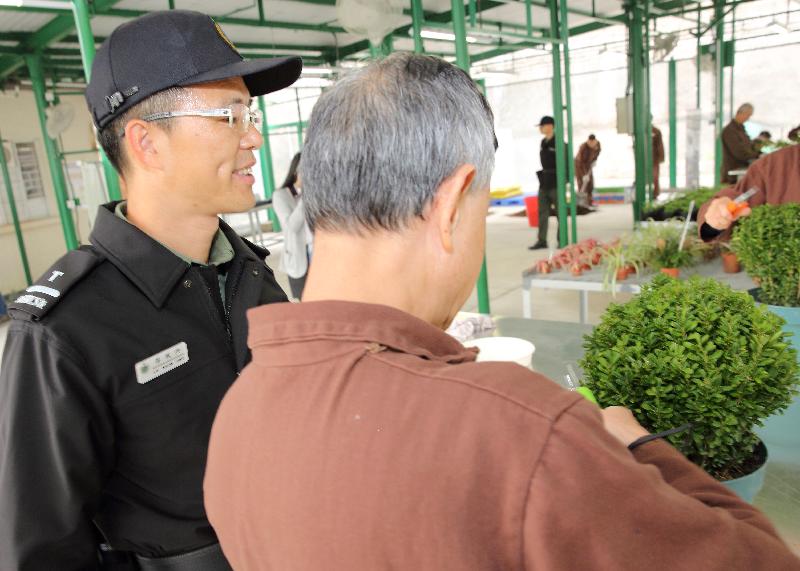 Elderly persons in custody, with the teaching of instructor, learn horticultural skills and knowledge, and refining their temperament at the same time.