Forty young persons in custody at Pik Uk Correctional Institution (PUCI) of the Correctional Services Department (CSD) were presented with certificates at a ceremony in recognition of their efforts and study achievements today (December 2).

In the past year, 118 persons in custody sat for various academic and vocational examinations including the Hong Kong Diploma of Secondary Education (HKDSE) Examination, examinations of the Open University of Hong Kong and examinations organised by City and Guilds International Limited, the Vocational Training Council, the Construction Industry Council and other examination bodies, covering the subjects of computer studies, hairdressing, basic Chinese cooking theory and practice, basic laundry skills and the Intermediate Trade Test for Joiner. They achieved 277 passes including 70 merits. Of the candidates, seven persons in custody sat 42 papers for this year's HKDSE Examination, obtaining level 2 or above in 39 papers. One candidate even scored 26 marks overall in six papers taken and successfully enrolled in a Bachelor degree programme offered by a local university. The 40 persons in custody who were presented with certificates today had passed 165 papers, 55 of which were distinctions and credits.

At the ceremony, the Chairman of the Board of Directors of Pok Oi Hospital, Mrs Winnie Tam, said that Pok Oi Hospital and the CSD are both striving to support education for the young generation since the schools run by Pok Oi adhere to the Pok Oi message of "We Love, We Care, We Serve" in nurturing the young generation. Likewise, the CSD conducts appropriate rehabilitation schemes and reforms young persons in custody, helping them to prepare well for their reintegration into society. She encouraged the young persons in custody to uphold the spirit of "Devoted to Learning, Striving for Betterment" and reform themselves through education and vocational training with the support of their families and the staff of the CSD.

During the ceremony, a representative of persons in custody spoke on his determination to turn over a new leaf and further his studies at the institution with the support of staff of the CSD and his family while his mother expressed her joy at seeing the positive change in her son. A band formed by persons in custody at PUCI sang to convey gratitude to all those helping them in rehabilitation.

Also attending the ceremony were the Commissioner of Correctional Services, Mr Yau Chi-chiu, representatives of non-governmental and community organisations, community leaders and parents of the certificate recipients.

PUCI has a capacity of 385 penal places for young male remand and sentenced persons in custody. The department provides half-day education programmes and half-day vocational training for the young persons in custody to help them rehabilitate and prepare for their reintegration into society. 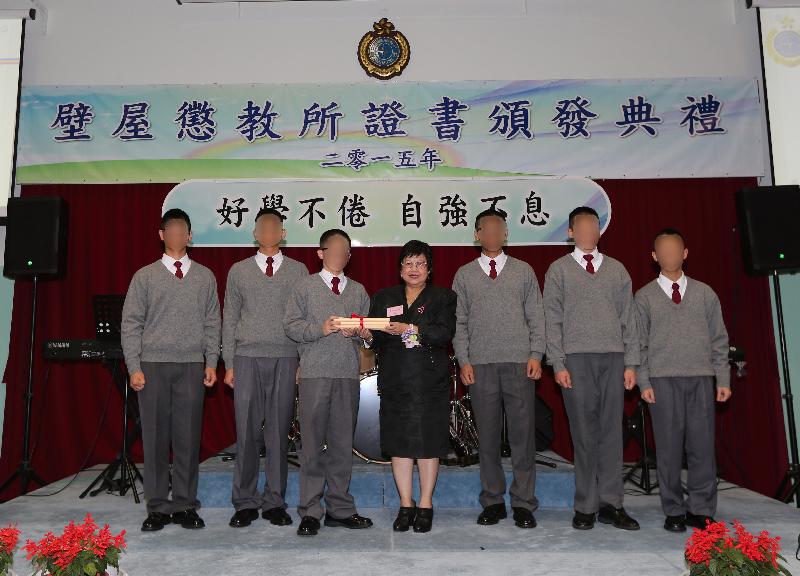 Forty young persons in custody at Pik Uk Correctional Institution of the Correctional Services Department (CSD) were presented with certificates at a ceremony in recognition of their efforts and study achievements today (December 2). Photo shows the Chairman of the Board of Directors of Pok Oi Hospital, Mrs Winnie Tam (centre), presenting certificates to a person in custody. 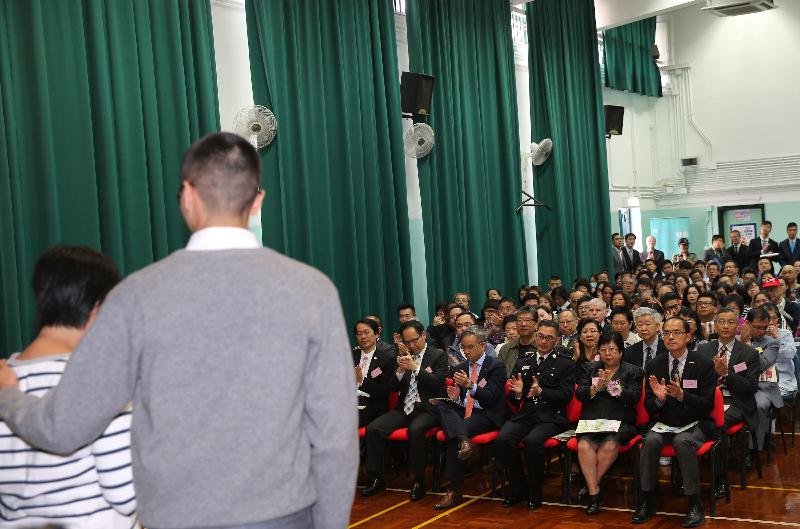 The mother of a young person in custody thanks correctional staff for their efforts in teaching her son, resulting in his good results in the Hong Kong Diploma of Secondary Education Examination. 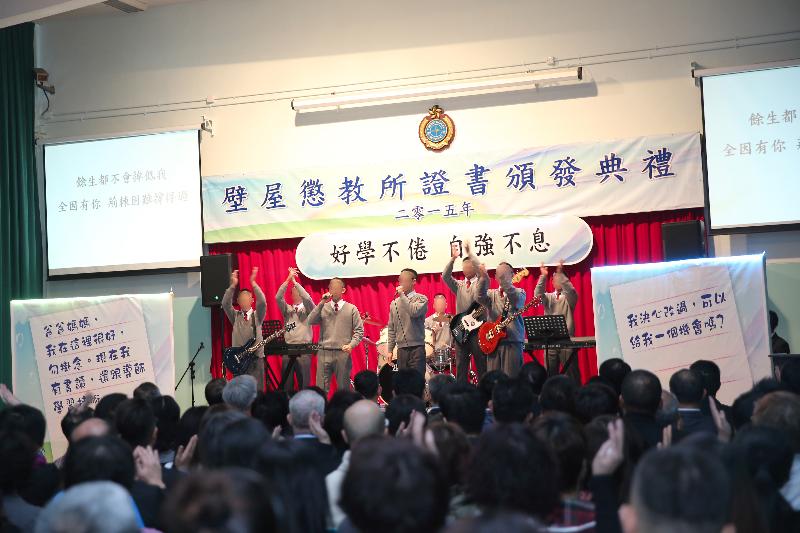 A band formed by persons in custody at Pik Uk Correctional Institution sings to convey gratitude to their families and CSD staff and to express their hope for a better future.