The Correctional Services Department (CSD) invited more than 300 teachers and students from eight secondary schools to take part in a "Creation and Rehabilitation" drama and music performance under the Rehabilitation Pioneer Project at Stanley Prison today (January 27). The Chairman of the Committee on the Promotion of Civic Education, Ms Melissa Pang, officiated at the opening ceremony of the performance, which echoed the themes of the "Appreciate Hong Kong" Campaign.

In the performance, persons in custody staged for the students a drama featuring the story of a secondary student who became addicted to the Internet and dangerous drugs, leading to poor academic performance. His family members all along worried about his situation, and his life turned even worse when he was involved in an assault case. It is hoped that the drama could prompt the youngsters to reflect on life, help them build up their independent thinking and judgement, and, more importantly, inspire them to care more for their family members while being law-abiding citizens and staying away from drugs.

Jointly organised by the CSD and the Catholic Diocese of Hong Kong Lay Prison Evangelical Organization, the "Creation and Rehabilitation" Programme was introduced to Stanley Prison in August 2011. The project aims at integrating arts therapy into rehabilitation services. Through their participation in the creative arts activities, persons in custody can learn how to pursue self-exploration and self-understanding, build up self-confidence, and acquire skills in problem solving and conflict resolution. In addition, the programme enhances the understanding of students on the diversified rehabilitative services provided by the CSD and their outcomes through creative activities and performances by persons in custody so as to enable the students to recognise the importance of public support for offender rehabilitation and the meaning of social harmony.

In her speech, Ms Pang quoted a passage by William Shakespeare: "All the world's a stage, and all the men and women merely players; they have their exits and their entrances, and one man in his time plays many parts, his acts being seven ages." She further gave encouragement to persons in custody who lost their way in the past and she expressed the hope that they would be well prepared and successfully reintegrate into society in future. In addition, she encouraged the participating students to show care and respect for rehabilitated offenders as well as jointly create a more harmonious and caring society.

Ah Man (false name), who shared his experience with students participating in the programme, said that the performance provided him with a platform to contribute to society in return and advised the teenagers not to make mistakes in their behaviour that might ruin their lives. Ah Man was sentenced to life imprisonment for the offence of murder and has just been recommended by the Long-term Prison Sentences Review Board and approved by the Chief Executive for substitution of indeterminate sentence by a determinate one.

Member of the Wong Tai Sin District Secondary School Heads Association and principal of Lok Sin Tong Yu Kan Hing Secondary School Mr Lau Chun-hung said the Rehabilitation Pioneer Project is meaningful and can spread the message of abiding by the law to students and offer a precautionary message. The experience gained today could help students stay alert to the temptation of crime and remind them of the importance of obeying laws.

Students of Lok Sin Tong Yu Kan Hing Secondary School said that the programme had enabled them to see persons in custody from another perspective and understand their determination to rehabilitate and positive attitude when facing challenges ahead. They were also impressed greatly by the drama, which revealed common mistakes committed by young people and helped them think of the heavy price paid for committing crime.

The CSD launched the Rehabilitation Pioneer Project in September 2008 to promote commitment to and belief in the rule of law, drug-free living and support for offender rehabilitation. 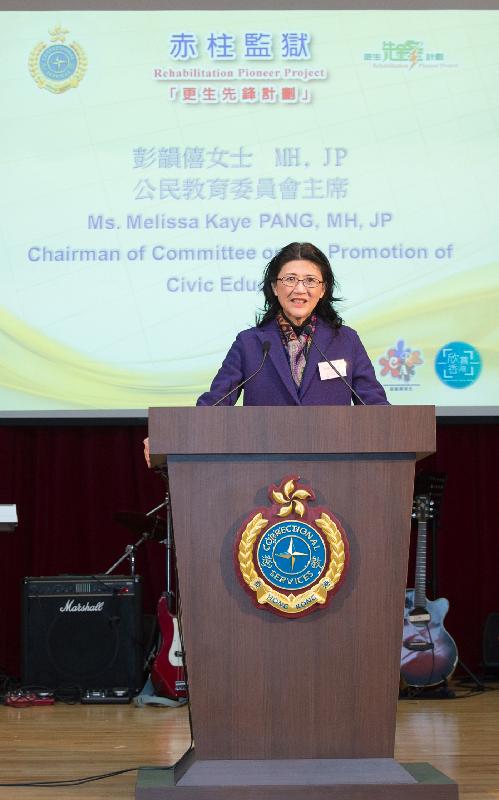 The Chairman of the Committee on the Promotion of Civic Education, Ms Melissa Pang, speaks at the "Creation and Rehabilitation" drama and music performance under the Rehabilitation Pioneer Project at Stanley Prison today (January 27). 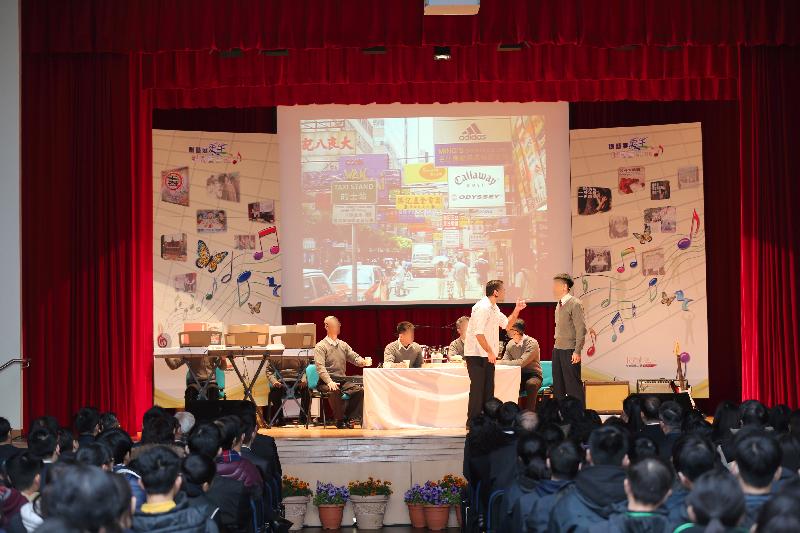 Persons in custody stage a drama for students. The performance aimed to convey the message to young people to reflect on life, build up independent thinking and judgement and think about consequences. 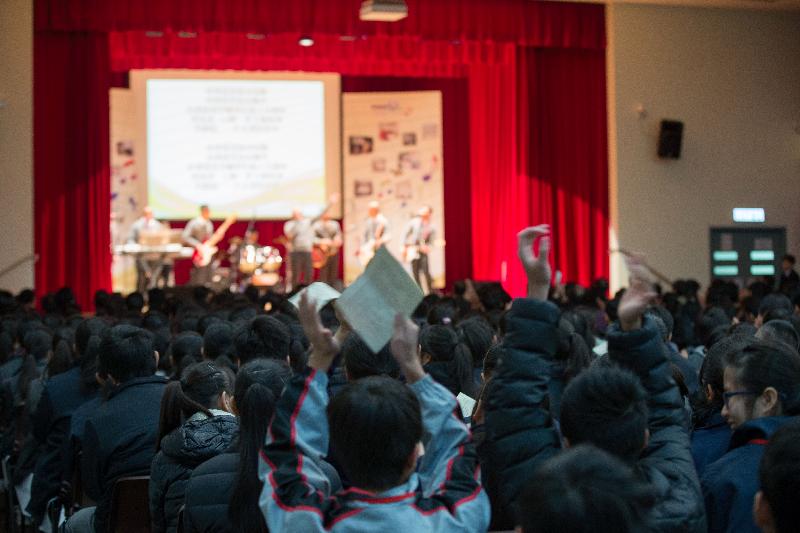 More than 300 secondary teachers and students from eight schools watch a drama performed by persons in custody.

During a sharing session, a person in custody (sixth left) uses his experience to advise the students that a wrong decision could damage their whole life.