In the same year, 147 high security risk persons in custody were convicted and newly admitted into the department's correctional facilities, representing a substantial increase of 39 per cent from 106 persons in 2014. Among them, 86 per cent had committed serious drug-related offences and 30 per cent came from other countries, he said.

On safe custody, Mr Yau said that there had been no successful escape case in eight consecutive years from 2008 to 2015. On the other hand, there had been an increase in acts of indiscipline in institutions. Under such circumstances, the CSD has strengthened its search activities in respect of persons in custody including large-scale joint search operations to combat illicit activities in institutions. In 2015, the Security Sub-unit of the department conducted 8 038 joint searching/special searching/night raid operations in institutions, representing a significant increase of 42 per cent over 5 673 operations in 2014.

Mr Yau said that there were 3 671 disciplinary charges involving 2 348 persons in custody last year, an increase of 79 charges (2 per cent) when compared with 3 592 charges in the previous year. Among these, the number of disciplinary charges involving "possessing unauthorised articles" rose significantly from 695 charges in 2014 by 193 charges (28 per cent) to 888 charges in 2015. There were 15 cases (one case fewer than the previous year's figure) involving correctional officers being assaulted during their course of duty. Notwithstanding the decrease, the number of staff injured increased from 18 persons to 29 persons.

He said that, as with people in the community, some persons in custody may commit self-harm behaviour for various reasons. In 2015, there were 72 self-harm cases involving persons in custody (four cases more as compared with 68 cases in the previous year). A great majority of these cases were discovered in time and the persons in custody concerned were rescued by correctional officers. Unfortunately, one person in custody died despite rescue efforts. The incident has been referred to the Police for investigation and the Coroner's enquiry will follow later.

Although the CSD's correctional work has been effective and the custodial environment has been safe and in good order, the associated security risks have increased, including a growing number of newly admitted Category A persons in custody, the number of medical escort duties remaining high and an increase in the number of disciplinary offences committed by persons in custody. To tackle emergencies that occur within and outside institutions and to step up tasks such as high-risk escort duties, the department plans to set up regular Regional Response Teams under the Escort and Support Group, with a view to providing more effective, prompt and tactical support at regional level, he said.

Mr Yau said that the CSD introduced four low-radiation X-ray body scanners in the reception centres in 2013 and 2014 to strengthen the security of correctional facilities and prevent the smuggling of dangerous drugs into institutions by concealment inside the human body. Three more scanners will be installed within this year. By then, a total of seven scanners will have been installed in all six reception facilities to replace most of the manual rectal searches.

The partial redevelopment project of Tai Lam Centre for Women commenced in mid-2012 and is scheduled for completion by the end of this year. Between now and 2019, the CSD will also upgrade the existing closed-circuit television (CCTV) system at Stanley Prison to a new digital system. The department plans to seek funding approval from the Legislative Council later this year to install an electric locks system at Stanley Prison, and to upgrade the existing CCTV systems at Siu Lam Psychiatric Centre and Pak Sha Wan Correctional Institution to digital systems.

On rehabilitation work, Mr Yau said that the department has been working closely with more than 80 non-government organisations (NGOs) to implement diversified and appropriate rehabilitation programmes and initiatives. Last year, 20 young persons in custody sat for the Hong Kong Diploma of Secondary Education Examination. They obtained results at Level 2 or above in 94 per cent of the examination papers. Some persons in custody even attained Level 5** for the first time or were admitted by local universities. In 2015, adult and young persons in custody sat for 1 103 papers in public examinations. There was an increase of 45 per cent as compared to 763 papers in 2014, with the overall passing rate rising from 72 per cent to 75 per cent. In addition, more than 500 persons in custody completed the distance learning courses offered by the Open University of Hong Kong or other tertiary institutions. Three of them were even awarded Bachelor's or Master's Degrees.

Mr Yau said that 20 vocational training courses are provided to young persons in custody to strengthen the employability of persons in custody. Courses provided in recent years include Dim Sum Making, Pet Groomer and Shop Assistant, Bar-Bending and Fixing, Timber Formwork Skill and Care Worker Training. Last year, some 1 400 adult persons in custody voluntarily enrolled in vocational training courses. This year, the CSD will also organise courses on Decorative Waterproof Worker Training for Renovation, Florist and Floriculture Assistant Training, Coffee House Operations and more. In 2015, a total of 2 882 vocational qualification examination papers and trade tests were taken by adult and young persons in custody. There was an increase of 9 per cent as compared to 2 649 papers in 2014, with the overall pass rate rising from 96 per cent to 97 per cent.

The CSD also encourages employers to register as "Caring Employers" and offer job opportunities to rehabilitated persons. In December 2015, the department organised the video conferencing job fair again with the Chinese Manufacturers' Association of Hong Kong and Merchants Support for Rehabilitated Offenders Committee Limited. More than 30 business organisations from 10 trades participated in the event. In mid-2016, the department will again organise the Employment Symposium with a tertiary institution to further explore how to facilitate the employment of persons in custody after release.

Over the years, the CSD has been reaching out to the community to promote rehabilitation work and seek public support for and acceptance of rehabilitated persons. In 2015, the department worked with the 18 District Fight Crime Committees to co-organise district-based publicity activities, Thank You NGO Month, the NGO Forum, and the Award Presentation Ceremony for Volunteers of the CSD Rehabilitation Volunteer Group, he said.

Mr Yau said that the CSD and the Department of Psychology of the Chinese University of Hong Kong (CUHK) have jointly conducted a five-year project on psychological counselling services for sex offenders. It was completed in 2015 and developed local Risks and Needs Assessment Tools for Sex Offenders. The project findings will enhance risk assessment and identification of sex offenders with risk of re-offending and the rehabilitation of sex offenders (programme matching) by targeting their rehabilitation needs. The assessment tools were ready for use on February 1 this year, both in preparation of psychological reports and programme matching.

On community education, the CSD focuses on disseminating to students and young people the important messages of leading a law-abiding and drug-free life as well as supporting rehabilitation under the Rehabilitation Pioneer Project. More than 30 000 participants attended various activities last year.

The CSD launched a new community education programme entitled "The Reflective Path" for students in September 2015. The programme, held in a mock court and the vacated Ma Hang Prison, enables students to experience the whole process of imprisonment, learn about Hong Kong's criminal justice system and correctional services, and understand the journey of persons in custody. In view of the positive and encouraging responses from schools and stakeholders, the department will continue to organise the programme to disseminate the messages to more young people for crime prevention purposes.

The attachment sets out the 2015 statistics of the CSD presented at the annual press conference.

After the press conference, the CSD announced the research findings of a study entitled "Construction of Risks and Needs Assessment Tools for Sex Offenders" jointly conducted by the CSD and the CUHK Department of Psychology last year. A person in custody who is receiving psychological treatment shared his thoughts and said that he understood himself more and was determined not to repeat his offence.

Mr Tse said rattan weaving is a way to train hand-eye co-ordination and concentration. It can also help a person in custody to achieve positive results in social interactions, emotion, physical condition, cognitive and mental development and creativity, as well as develop good work habits and increase a sense of personal achievement.

The Chief of Service of the Department of Forensic Psychiatry of Castle Peak Hospital, Dr Bonnie Siu, talked about common forms of mental illness suffered by persons in custody, such as anxiety disorder and depression, and their treatment. 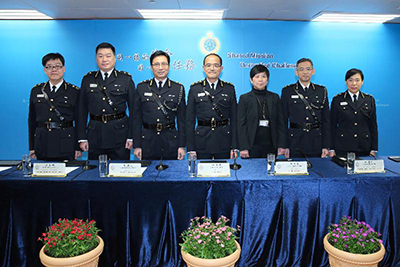 Senior Clinical Psychologist of the Correctional Services Department (CSD), Dr Judy Hui (right), and the Chairman of the Department of Psychology, Chinese University of Hong Kong (CUHK), Professor Patrick Leung (left) brief the media on the research findings of a study entitled "Construction of Risks and Needs Assessment Tools for Sex Offenders" jointly conducted by the CSD and CUHK.

The Chief of Service of the Department of Forensic Psychiatry of Castle Peak Hospital, Dr Bonnie Siu (left), talks about common mental illnesses suffered by persons in custody and their treatment in the Carpentry and Rattan Workshop. Standing next to her is the Senior Superintendent of Siu Lam Psychiatric Centre, Mr Culex Tse (right). 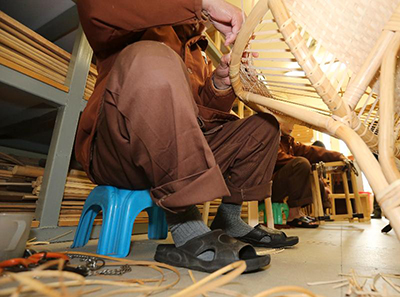 Persons in custody make rattan products in the Carpentry and Rattan Workshop.