One hundred and eighty-four persons in custody at Lo Wu Correctional Institution (LWCI) were presented with certificates at a ceremony today (March 16) in recognition of their continuous efforts to pursue further studies.

In 2015, 238 persons in custody at LWCI passed 360 papers in various academic courses and public examinations organised by the Open University of Hong Kong, the City and Guilds International Limited and the London Chamber of Commerce and Industry. Subjects taken included languages, marketing, business management, business calculations, bookkeeping and accounts. Today's 184 awardees passed 250 papers, achieving a total of 60 distinctions and credits.

Officiating at the ceremony, the Chairperson of the Po Leung Kuk (PLK), Dr Pollyanna Chu, said that the PLK is highly supportive of the diverse and sustainable rehabilitation work of the Correctional Services Department (CSD) and is supporting persons in custody to pursue further studies by funding the Prisoners' Education Trust Fund this year. Dr Chu added that she appreciates the market-oriented vocational training courses provided by LWCI, which lay a solid foundation for the reintegration of rehabilitated offenders into society. Dr Chu gave her assurance that the PLK will continue to collaborate with the CSD to promote offender rehabilitation. She also encouraged persons in custody to pursue further studies with a view to making contributions to society in future.

At the ceremony, a representative of persons in custody spoke about her experiences in her journey towards rehabilitation and expressed her gratitude for her family members' support. The mother of the person in custody also expressed her feelings and expectations towards the rehabilitation path as a means of encouraging her daughter to strive hard continuously to prepare well for future reintegration into society.

Under the guidance of instructors from non-governmental organisations, persons in custody staged a drama and dance performance to show gratitude to their families, volunteers from non-governmental organisations and institutional staff. The drama was about a lady who had just given birth, recalled the memory of her mother who was imprisoned before and expressed yearning for her mother as well as gratitude towards the correctional institution and those supporting offender rehabilitation. The performance, which involved persons in custody of different nationalities, was testimony to the spirit of being culturally inclusive. It aimed at expressing the performers' gratitude towards their beloved ones, in particular family members, and their keen efforts towards reintegration into society.

The CSD has long been providing a favourable environment to encourage adult persons in custody to pursue studies while in custody. To prepare rehabilitated offenders for their return to the community, the CSD provides courses for them to acquire work-related training and recognition. The department also helps them to attain job-relevant accreditation by applying through the Recognition of Prior Learning Mechanism under the Hong Kong Qualifications Framework in accordance with their working knowledge, skills and experience. Those with financial difficulties may apply for an education subsidy.

Also attending the ceremony were the Commissioner of Correctional Services, Mr Yau Chi-chiu; representatives of non-government and community organisations; community leaders; and family members of persons in custody.

LWCI, established in 2010, is a medium security institution. It accommodates 1 400 female adult persons in custody. 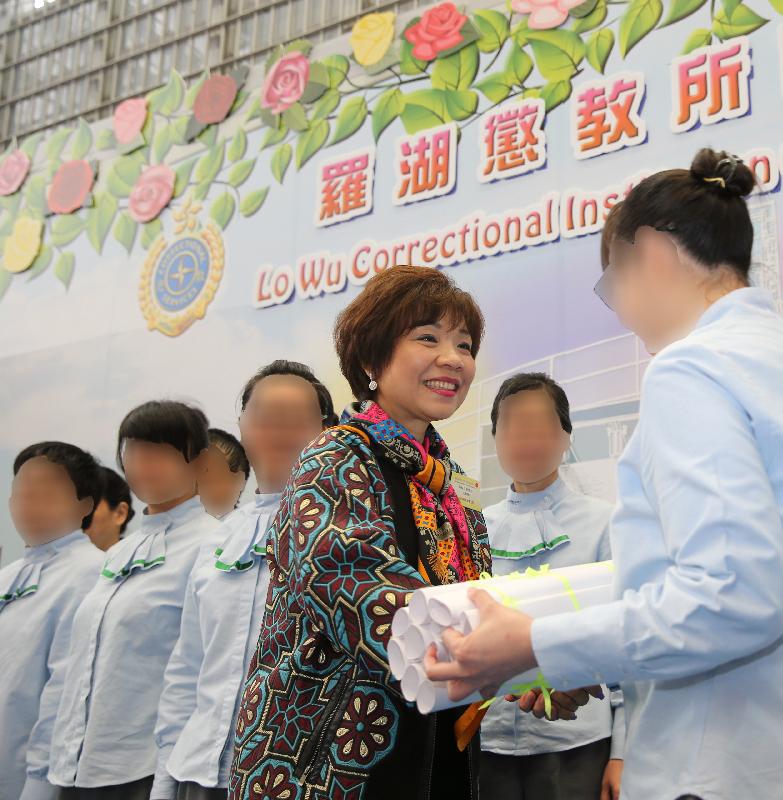 One hundred and eighty-four persons in custody at Lo Wu Correctional Institution were presented with certificates at a ceremony today (March 16). Photo shows the Chairperson of the Po Leung Kuk, Dr Pollyanna Chu (centre), presenting certificates to a person in custody. 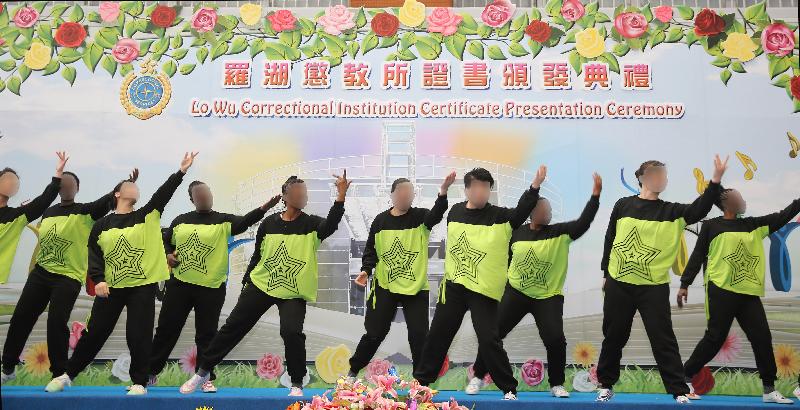 Persons in custody of different nationalities stage a drama and dance performance at the ceremony to show gratitude to their families, volunteers from non-governmental organisations and institutional staff. The performance was testimony to the spirit of being culturally inclusive.