Mr Yau said at the press conference that the CSD attaches great importance to the strict enforcement of discipline and order in correctional facilities with a view to providing a safe and secure custodial environment for protection of public safety and providing appropriate rehabilitation programmes for persons in custody. Although most of the persons in custody conform to order and discipline as well as show a sense of remorse, some remain resistant to change and breach discipline. These persons affect adversely the general norms of institutions and the safety of others.

Mr Yau said, "Recently, there were large-scale prison disturbances, riots or escape in some countries or places causing serious social impacts. Such incidents greatly threatened public safety outside the walls. In Hong Kong, we have a professional team of correctional officers to prevent acts of indiscipline and violence. The CSD has adopted a 'nip-in-the-bud' and 'zero-tolerance' strategy. We strengthen intelligence collection and curb all acts of illicit activities at an early stage. We also step up searching operations so as to reduce contraband, such as home-made weapons, dangerous drugs, gambling tools and home-made wine."

There has been no successful escape case for nine years in a row, from 2008 to 2016. Last year, although there were two attempted escape cases, they were stopped by correctional officers instantly.

In 2016, there were 20 049 new admissions of sentenced persons or remands under the CSD, representing a slight increase of 2.9 per cent from 19 479 persons in 2015. Among them, 149 high security risk persons in custody were sentenced and newly admitted into correctional facilities. The number was similar to that in the previous year (147 persons), though representing a substantial increase of 41 per cent as compared with 2014 (106 persons). Among them, 90 per cent had committed serious drug-related offences, and 34 per cent came from other countries.

Mr Yau said security risks have been on the rise in recent years. The CSD established three small-scale professionally trained Regional Response Teams (RRTs) as scheduled through redeployment of existing resources last September. The RRTs are stationed in Hong Kong Region, Kowloon Region and Lantau Island Region respectively. In addition to strengthening the escort of high security risk persons in custody and rendering prompt reinforcement in the event of emergencies, the RRTs also patrol the outer perimeters of correctional facilities in their respective Regions, and assist in carrying out other duties, such as providing tactical training for front-line officers and facilitating joint operation to combat illicit activities in institutions. The outcome has proved to be satisfactory.

The CSD's "nip-in-the-bud" strategy has been successful in cracking down on acts of indiscipline. The incident at Stanley Prison, a maximum security prison, on January 5 this year is a case in point. A total of 138 persons in custody staged a collective hunger strike and refused to return to their cells in a bid to coerce the management into releasing other persons in custody who had breached discipline. The department deployed extra manpower including a newly established RRT to cope with the event. Within three hours the correctional officers managed to end the incident swiftly in a resolute and peaceful manner, thus thwarting any deterioration and occurrence of unintended consequences.

Regarding acts of violence, a total of 527 cases which mainly involved fighting among persons in custody and assault were recorded last year, representing an increase of five cases (1 per cent) from 522 cases in 2015. Among them, 39 cases were of a more serious nature and were reported to the Police for follow-up, representing an increase of three cases (8 per cent) as compared to 36 cases in 2015. The remaining cases were dealt with in accordance with internal disciplinary proceedings. The number of counts of correctional officers being injured while stopping violence or other behaviours was 73 in total. Last year, there were 18 cases involving correctional officers being assaulted during the course of their duty, representing an increase of three cases (20 per cent) from the number in 2015. However, the number of correctional officers injured on duty decreased by eight persons (28 per cent) from 29 persons to 21 persons. Most of the injuries were caused by fists and legs. Such a result reflects that the "nip-in-the-bud" strategy has prevented serious bodily harm and upheld a safe custodial environment.

Mr Yau said 20 vocational training courses are provided for young persons in custody. More than 40 market-oriented courses are available on a voluntary basis to adult persons in custody who are due for discharge within three to 24 months. Last year, new courses including Decorative Waterproof Worker Training for Renovation, Florist and Floriculture Assistant Training and Coffee House Operations were organised. This year, foundation certificate courses in plumber training for interior renovation and pet sitting will be introduced.

Over the years, the CSD has long been promoting rehabilitation work and seeking public support for and acceptance of rehabilitated persons so as to reduce their re-offending risks, which, in effect, makes Hong Kong a safer society. Over the past 10 years, based on 2005 and 2014 as the respective years of discharge, Hong Kong's recidivism rate has decreased from 35.6 per cent to 25.9 per cent. The result is highly encouraging. In essence, it reflects the outcome jointly made through the hard work of correctional officers, the determination of persons in custody and rehabilitated persons to turn over a new leaf, and the growing support from stakeholders in the community. Mr Yau took the opportunity to extend his heartfelt appreciation to all stakeholders concerned and friends from the media for their solid support in promoting rehabilitation work and assisting rehabilitated persons to start afresh. He pointed out that such efforts create positive values for a more inclusive society.

On community education, the CSD disseminates to students and young people the importance of leading a law-abiding and drug-free life as well as supporting rehabilitation through the Rehabilitation Pioneer Project (RPP), which amongst others includes a programme named "The Reflective Path". Last year, 36 000 young participants took part in various activities. The first RPP Facebook Page was also launched in January 2016 to sustain closer connection with the participants.

In late 2016, the CSD commissioned a university to conduct research to estimate the social costs saved through the department's rehabilitation work and community education in reducing re-offending and preventing crime. The research will be conducive to quantifying the effectiveness of the correctional services provided by the CSD and the contributions towards the sustainable development of society. The findings will be released later this year.

The year 2017 marks not only the 20th anniversary of the establishment of the Hong Kong Special Administrative Region, but also the 35th anniversary of renaming the Prisons Department as the Correctional Services Department. The renaming signifies the change of the CSD's mission from merely performing a custodial role to placing dual emphasis on both safe custody and rehabilitation. During the first 15 years, the CSD took up an important task, in addition to its own duties, of managing tens of thousands of Vietnamese boat people. It was not until the establishment of the Rehabilitation Division in early 1998 and the closure of High Island Detention Centre, the last Vietnamese refugee centre under the management of the CSD, in late May of the same year that the department was able to implement rehabilitation policies in full swing. Over the past 20 years, with the support of various sectors of the community, the CSD has managed to achieve the present results in rehabilitation.

Mr Yau said that this year the CSD will organise a wide range of celebration activities to mark the milestones for both the Hong Kong Special Administrative Region and the CSD. These activities will showcase the development of correctional work and its contributions to an inclusive and sustainable society. Apart from regular rehabilitation promotion activities, new scheduled activities will include, inter alia, the Open Day of the Staff Training Institute and lantern-making as intangible cultural heritage of Hong Kong together with strategic community partners. The department will also organise a conference in collaboration with a local university in July. Relevant local and Mainland/overseas organisations will be invited to discuss the role of correctional work in the sustainable development of societies. The department is also working on a social enterprise partnership project to create opportunities for the disadvantaged through closer collaboration among the public, the business sector and the Government with a view to enhancing positive energy in the society.

The attachment sets out the 2016 statistics of the CSD presented at the annual press conference.

After the press conference, media representatives toured the new facilities of Tai Lam Centre for Women to learn about the partial redevelopment programme of the institution. 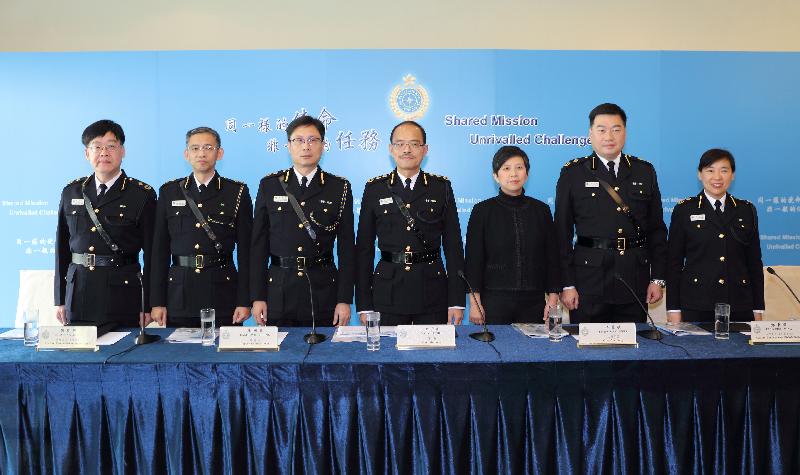 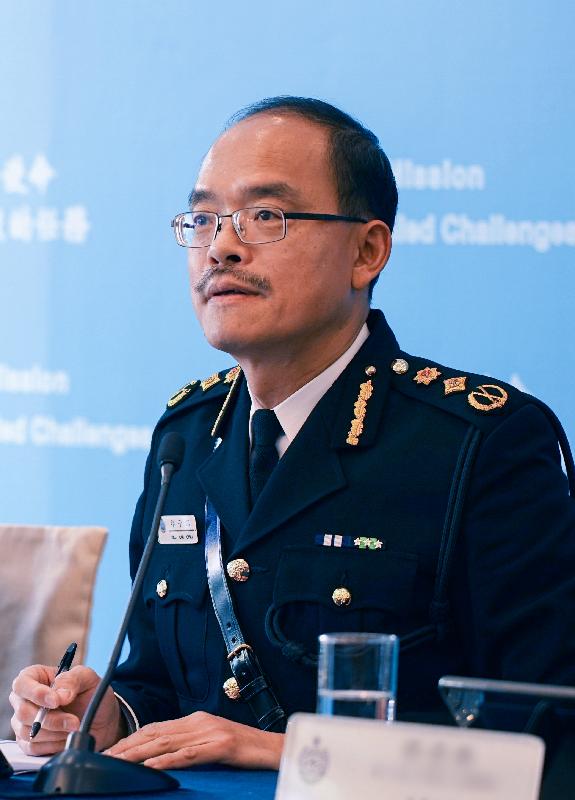 The Commissioner of Correctional Services, Mr Yau Chi-chiu, today (February 8) says at the annual press conference that the CSD attaches great importance to the strict enforcement of discipline and order in correctional facilities with a view to providing a safe and secure custodial environment for protection of public safety and providing appropriate rehabilitation programmes for persons in custody. 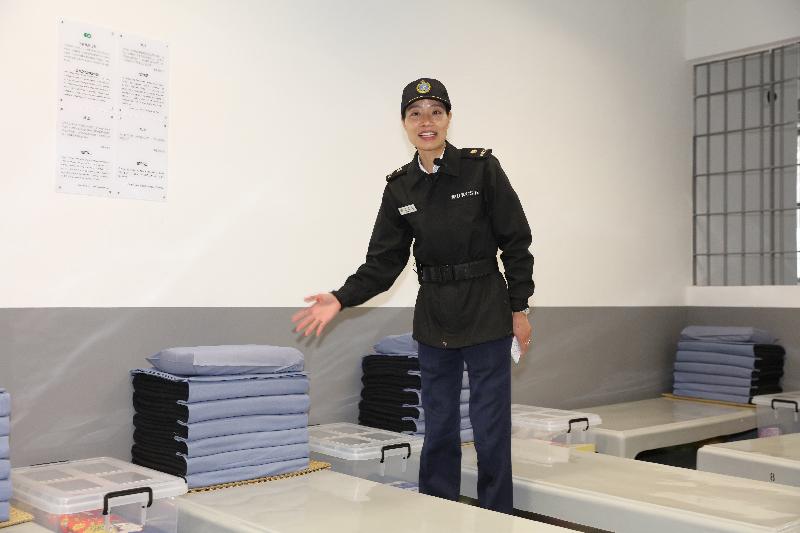 The Superintendent of Tai Lam Centre for Women, Ms Betty Chan, today (February 8) briefs the media about the partial redevelopment programme of the institution.