A total of 154 persons in custody at Lo Wu Correctional Institution (LWCI) of the Correctional Services Department (CSD) were presented with certificates at a ceremony today (March 8) in recognition of their academic achievements.

Officiating at the ceremony, the Chairman of the Board of Directors of the Yan Oi Tong (YOT), Dr Tang Kam-hung, said that as a long-standing charitable organisation, the YOT has been committed to expanding its services to support vulnerable groups in society. As a close partner of the CSD, the YOT would continue to adopt a proactive and flexible attitude to support persons in custody on their path of rehabilitation, he said. In addition to co-organising a number of large-scale rehabilitative activities with the CSD to promote acceptance of rehabilitated offenders to the public, members of the Board of Directors of the YOT also visited various correctional institutions to offer their support and encouragement to persons in custody. In recent years, the YOT has also worked jointly with the CSD in building a safer and more harmonious society by sponsoring secondary students in YOT schools to participate in Rehabilitation Pioneer Project activities, so as to encourage youngsters to lead a law-abiding and drug-free life as well as supporting offender rehabilitation.

At the ceremony, a representative of persons in custody spoke about her experience in her journey towards rehabilitation and expressed her gratitude to her family members for their support. The mother of the person in custody also expressed her feelings and expectations for her daughter, and said that the path towards rehabilitation is a means of encouraging her daughter to strive hard continuously and prepare well for future reintegration into society.

Under the guidance of volunteers, persons in custody of different nationalities staged a performance of African drum and group singing to show gratitude to their families, the volunteers and correctional staff. In the performance the persons in custody showed their ability to face and overcome difficulties, while also expressing their determination to change and their thankfulness. The performance also reflected the ceremony's theme of "rehabilitation and change".

The CSD has long been providing a favourable environment to encourage persons in custody to pursue studies while in custody. To prepare rehabilitated offenders for their return to the community, the CSD provides courses for them to acquire work-related training and recognition. The department also helps them attain job-relevant accreditation by applying through the Recognition of Prior Learning Mechanism under the Hong Kong Qualifications Framework in accordance with their working knowledge, skills and experience. Those with financial difficulties may apply for an education subsidy.

Also attending the ceremony were the Deputy Commissioner of Correctional Services, Mr Lam Kwok-leung, representatives of non-governmental and community organisations, community leaders and family members of persons in custody. 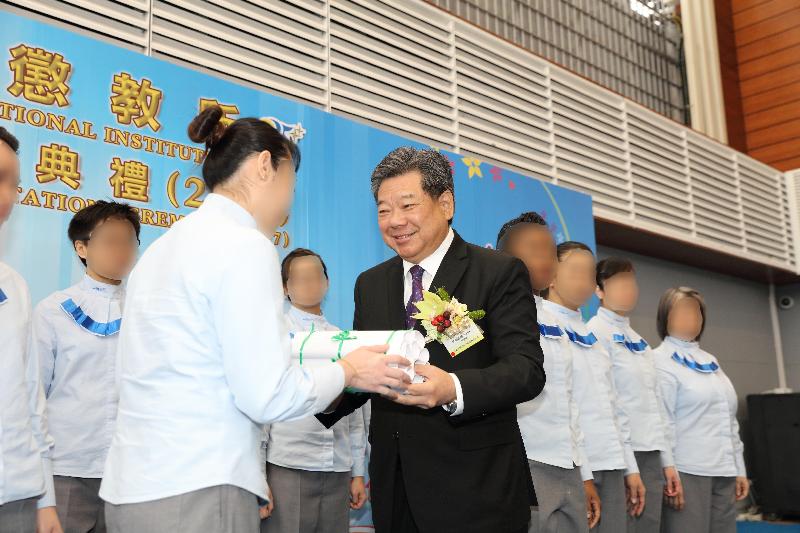 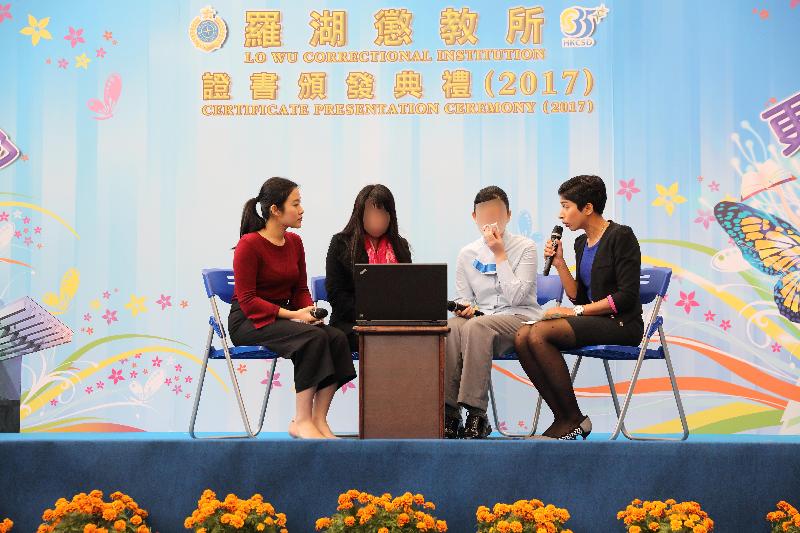 A total of 154 persons in custody at Lo Wu Correctional Institution of the Correctional Services Department were presented with certificates at a ceremony today (March 8). At the ceremony, a representative for persons in custody (second right) spoke about her life so far at the institution and her mother (second left) expressed her feelings and expectations for her daughter.

A total of 154 persons in custody at Lo Wu Correctional Institution of the Correctional Services Department were presented with certificates at a ceremony today (March 8). Persons in custody staged a performance of African drum and group singing to show gratitude to their families, volunteers and institutional staff.