Thirty-four persons in custody at Cape Collinson Correctional Institution (CCCI) of the Correctional Services Department (CSD) were presented with certificates at a ceremony in recognition of their study efforts and achievements today (September 6).

In the past year, 94 persons in custody at the institution sat for various academic and vocational examinations including the Hong Kong Diploma of Secondary Education (HKDSE) Examination, examinations of the Associated Board of the Royal Schools of Music and examinations covering the subjects of Chinese word processing, basic plumbing, creative design and application, the Intermediate Trade Test for Electrical Wireman and basic laundry skills organised by City and Guilds International Limited, the Vocational Training Council, the Construction Industry Council and the Society of Rehabilitation and Crime Prevention, Hong Kong. They achieved 48 merits out of 202 certificates obtained. Among the candidates, eight persons in custody enrolled in this year's HKDSE Examination. One candidate scored 21 marks in six papers taken and was admitted to a bachelor degree course while others enrolled in other post-secondary programmes.

Officiating at the certificate presentation ceremony, the Chairman of Tung Sin Tan, Mr Ha Tak-kin, said that Tung Sin Tan endeavours to serve the community through respecting the elderly and protecting the young. Apart from participating in charity work in society, it is highly supportive of the CSD's various and sustained rehabilitation schemes. It has therefore collaborated with the CSD by organising various competitions and setting up an education fund to encourage persons in custody to pursue further studies, cultivate virtues and get on the right track. Mr Ha stated that he is grateful to see that persons in custody can obtain satisfactory results, particularly in the HKDSE Examination.

During the ceremony, a person in custody of CCCI spoke about his learning experience in preparing for the HKDSE Examination in the institution, culminating in his admission to a bachelor degree course. He recalled the days he kept going astray and was sentenced to the correctional institution. He was then determined to study and obtain a good examination result. During the process, he was supported by teachers and correctional staff. He had not expected to undergo such a great change, so he was grateful to have had the opportunity to turn over a new leaf. He especially wanted to express his gratitude to Father John Russell, who has been teaching English voluntarily for about 30 years in correctional institutions since November 1987 and continues to teach the HKDSE class every week at the age of 91. The persons in custody paid respect to him through reciting a poem adapted from the lyrics of a song.

Family support is important for the rehabilitation of persons in custody. The mother of a person in custody also spoke about the positive changes in her son. She was saddened to see that her son had been sentenced to the correctional institution. Fortunately, her son received diverse vocational training and professional guidance from the staff in the institution. She noticed that her son had become an amiable person, and he has also learnt how to care for family members. She said she truly understands the importance of rehabilitation work. During the ceremony, a band formed by persons in custody at CCCI sang to convey their love for their families.

Also attending the ceremony were the Assistant Commissioner of Correctional Services, Mr Tang Ping-ming; representatives of non-governmental and community organisations; community leaders; and parents of the certificate recipients.

CCCI has a capacity of 192 penal places for young male persons in custody aged from 14 to under 21 who are ordered by court to undergo the training centre programme for an indeterminate period of six months to three years.

The department provides half-day education programmes and half-day vocational training for persons in custody to help them rehabilitate and prepare for reintegration into society. 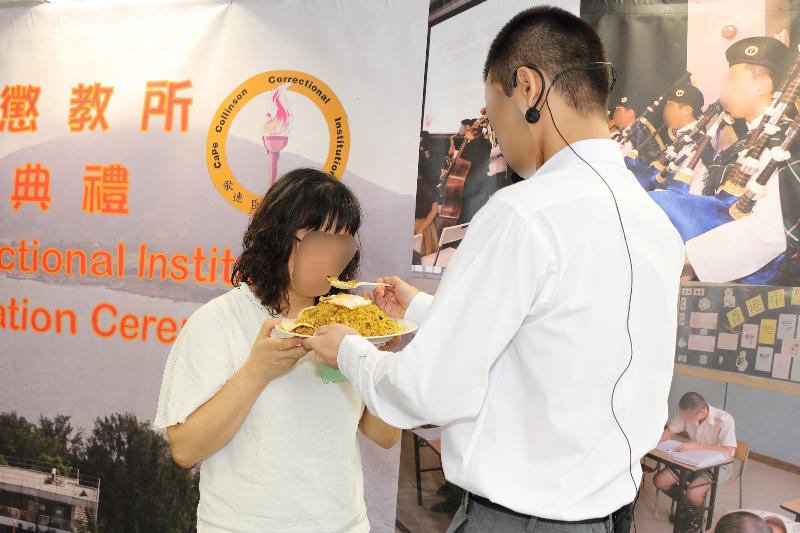 Thirty-four persons in custody at Cape Collinson Correctional Institution of the Correctional Services Department were presented with certificates at a ceremony today (September 6). Photo shows a person in custody (right) at the ceremony letting his mother (left) taste fried rice prepared by him. 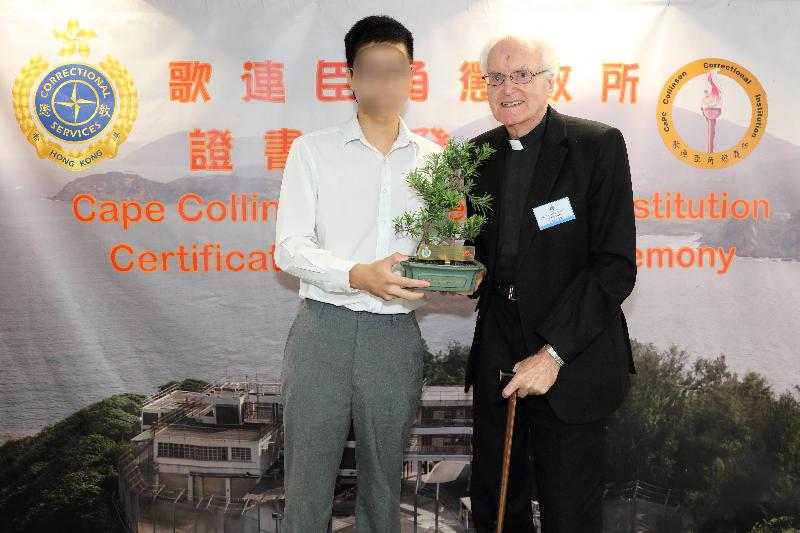