Mr Lam said at the press conference that in 2017, while the CSD faced various challenges, in pursuance of the responsibilities and powers vested in law, correctional officers are committed to ensuring a secure, safe, humane, decent and healthy custodial environment at all times. Moreover, the CSD, in collaboration with various community stakeholders, creates rehabilitation opportunities to enable persons in custody to re-integrate into society upon release. Furthermore, the department promotes law-abiding and inclusive values through community education with a view to preventing crime.

As at December 31, 2017, more than 10 000 persons were under the management of the CSD, including 8 423 persons in custody and 1 723 supervisees under statutory supervision after release.

Mr Lam said, "It is our duty to provide a safe and secure custodial environment and to help persons in custody rehabilitate and re-integrate into society. Although most persons in custody conform to order and discipline and show a sense of remorse, some commit acts of indiscipline. These affect adversely the order of institutions and the safety of others.

"In recent years, there were large-scale prison riots or escapes in some countries or places in the world, causing deaths and injuries and severely threatening public safety. To prevent such occurrences, we review and strengthen preventive measures, contingency plans and staff equipment from time to time so as to curb all acts of illicit activities.

"There has been no successful escape case for 10 years in a row, from 2008 to 2017. Last year, although there was one attempt, it was stopped by correctional officers instantly.

On the other hand, the acts of indiscipline in correctional institutions continued to rise, particularly among persons in custody with a history of drug abuse. We will take all feasible measures to crack down on all illicit activities in institutions."

In 2017, there were five cases of concerted acts of indiscipline, a decrease of three cases compared to 2016. These included fighting and inciting other persons in custody to get involved in collective actions, such as refusing to eat or preventing correctional officers from entering the dormitory to enforce the law.

As for cases involving violence, a total of 546 cases were recorded in 2017, which mainly involved fighting among persons in custody and assaulting others including correctional officers. It represented an increase of 19 cases (4 per cent) from 2016 (i.e. 527 cases).

In 2017, there were eight cases involving correctional officers being assaulted during the course of duty, representing a decrease of 10 cases from the number in 2016. The number of correctional officers injured on duty also decreased from 21 persons to 6 persons, i.e. 15 persons less (71 per cent). Most of the injuries were relatively minor.

With X-ray body scanners as well as a monitoring system and intelligence network, the CSD has effectively stopped the smuggling of drugs into correctional institutions. In 2017, there were 30 cases of seized drugs, representing a 25 per cent decrease from 40 cases in 2016.

Mr Lam said that the CSD has all along explored with relevant organisations different proposals to reduce the inconvenience caused to the public when persons in custody attend medical appointments at outside hospitals. For example, as early as June 2014, the CSD conducted a research study with Castle Peak Hospital under the Hospital Authority. The psychiatrists at Castle Peak Hospital used video conferencing systems to provide a medical consultation service for persons in custody inside correctional institutions. The persons in custody concerned were kept under stable conditions and participation in the study was voluntary.

This year marks a milestone for the 20th anniversary of the establishment of the Rehabilitation Division. The CSD has been fostering closer partnerships with different community stakeholders, including 18 District Fight Crime Committees, charitable organisations, non-government organisations, the business sector and universities. Through diversified programmes and activities, the CSD seeks to enhance various sectors' support for rehabilitation work and help persons in custody re-integrate into society after release.

Mr Lam said that the CSD arranges for convicted adult persons in custody to engage in work according to statutory provisions. The introduction of computerised production facilities, such as graphic design software, digital cutting machines and international standard testing equipment, not only boosts productivity but also enables them to acquire up-to-date skills and common knowledge, such as regulations on quality management and occupational safety and health. Such skills and knowledge will enhance their employability in different sectors in future to facilitate re-integration into society.

Last year, new courses such as the Foundation Certificate in Plumber Training for Interior Renovation and Foundation Certificate in Pet Sitting were organised. This year, the CSD will introduce new foundation certificate courses in Floor Layer of Interior Renovation and AutoCAD in Renovation Drawings. All these courses are organised by various local training bodies, and have attained the Qualifications Framework level or are accredited by professional bodies, thus enabling rehabilitated persons to work or enrol in bridging or progressive courses in future.

On community education, the CSD disseminates to young people, especially students, the importance of leading a law-abiding and drug-free life as well as supporting rehabilitation through the Rehabilitation Pioneer Project, which among others, includes a programme named "The Reflective Path". Last year, the attendance was over 39 000, including young people and other participants in various activities. The programmes were well received with positive responses.

Mr Lam said that the CSD plans to form a team of Rehabilitation Pioneer Leaders this year for young people with leadership potential. The objective is to help them broaden horizons and develop their potential through diversified training programmes. They will also be encouraged to actively contribute to society in future by helping to promote law-abiding values and support for offender rehabilitation for a better Hong Kong.

After the press conference, media representatives toured the Virtual Reality Training Facilities at the Staff Training Institute and the CSD Dog Unit Headquarters in Stanley and watched demonstrations by Kunming dogs. 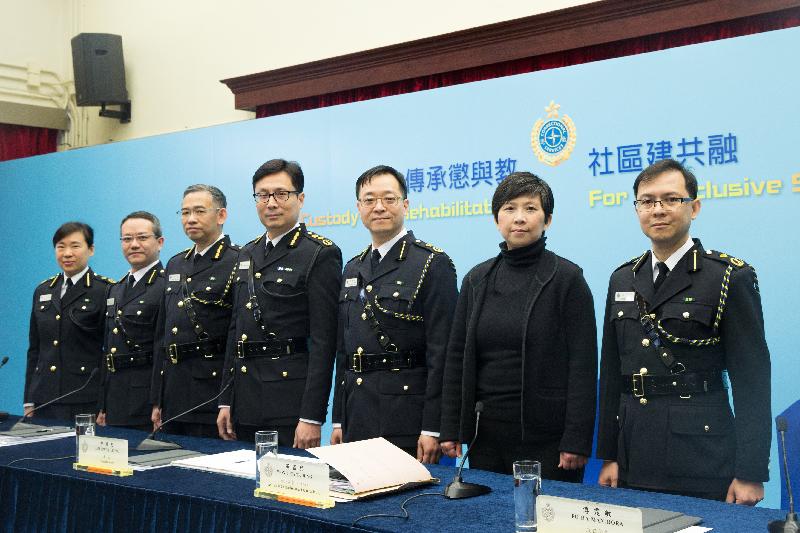 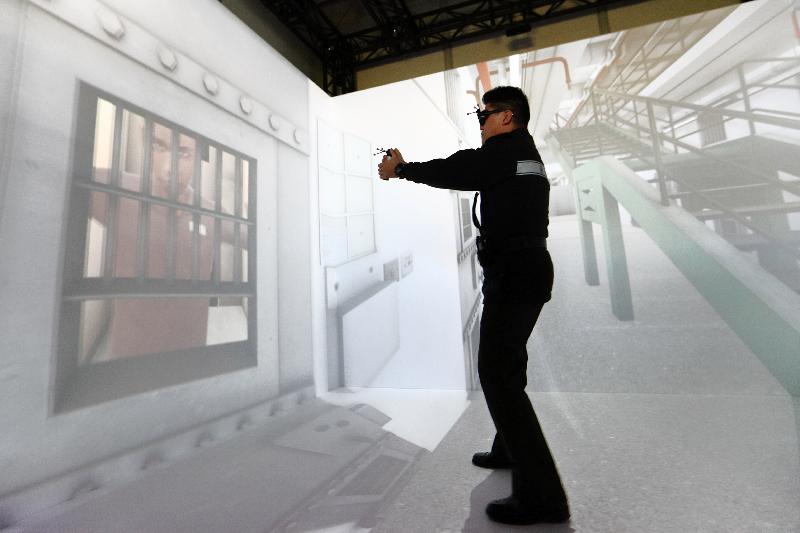 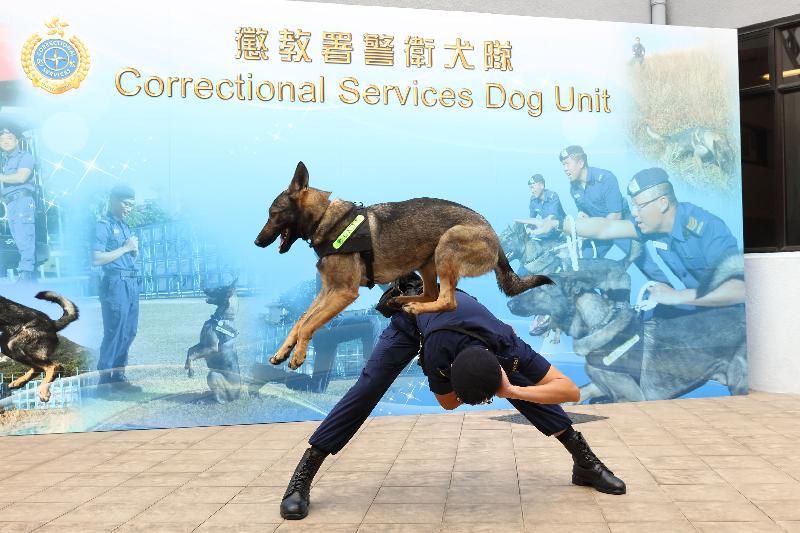 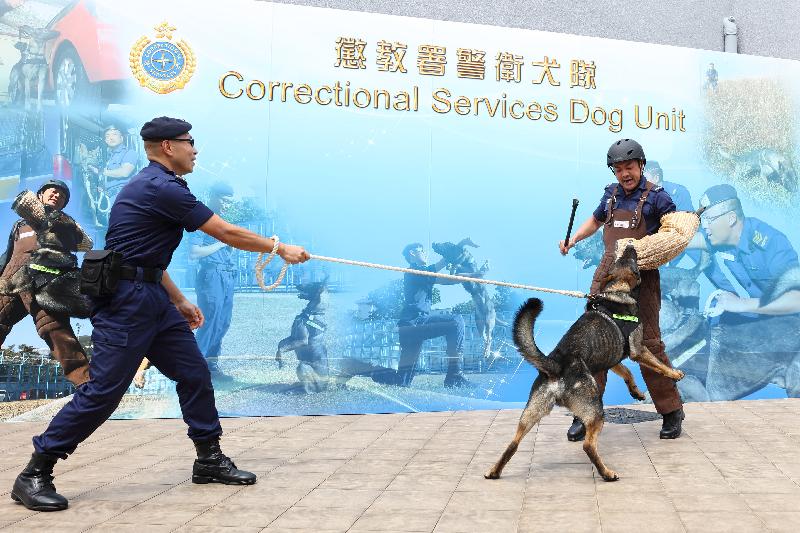