The course was the first of its kind jointly organised by the Correctional Services Department (CSD) and the Hong Kong Table Tennis Association (HKTTA).

The department arranged for 18 PUCI inmates, aged between 16 and 21, to join the eight-week training course in March. Fourteen of them were awarded bronze certificates and badges under the Badges Scheme Award and Ambassador Scheme.

Speaking at the certificate presentation ceremony, Chairman of the HKTTA Mr Yue Kwok-leung said, "The training can help young people cultivate a healthy lifestyle and develop a positive attitude towards life. This, also being the target of the training, coincides with the department's call for supporting offender rehabilitation."

Mr Yue supported the department's call and hoped that co-operation between HKTTA and CSD would be further strengthened.

He described life as a ball game with ups and downs. He said table tennis training and matches could foster young people and help them face success and failure with a positive attitude.

"I firmly believe that everyone here is talented and is able to strive for a promising future if he works hard,"  Mr Yue said.

The table tennis training course was organised to give young inmates an opportunity to receive professional coaching in the game inside a penal institution. In the process of training, inmates learned not only table tennis skills, but also perseverance and determination. This helped strengthen inmates' self-confidence and self-identity, which had a positive impact on their rehabilitation. 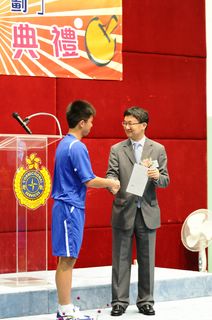 Chairman of the HKTTA Mr Yue Kwok-leung presents bronze certificate to an inmate of PUCI. 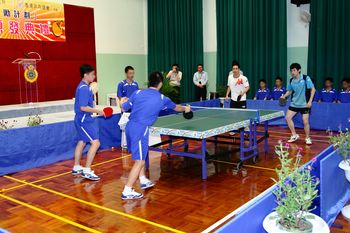