A torch relay of the 2009 East Asian Games (EAG) was held in Cape Collinson Correctional Institution (CCCI) today (November 26) to let inmates and their families experience together the  atmosphere of EAG.

Speaking at the ceremony, the Superintendent of CCCI, Mr Kwong Yiu-wing said, "The Asian Games torch relay in CCCI is the first of its kind in a correctional institution, symbolising participation in the games   by all."

"To prepare for the torch relay, inmates actively exercised and participated in various physical fitness sports, through which they learnt the sports spirit of self-improvement, justice and integrity. They also get the courage to face various challenges and have good preparation for reintegration."

Mr Kwong said in addition to continuous learning and vocational training skills, inmates had, in the past year, participated in various volunteer activities including hair-cutting services for the elderly and country tree-planting.

When the torch handover ceremony began, Mr Tsin passed the lighting torch to Mr Kwok, while Rehabilitation Ambassador and triathlete Lee Chi-wo together with an inmate received the torch from Mr Kwok and started the torch relay. Three inmates and two staff members alternated the relay with Mr Lee Chi-wo along the route in CCCI, passing through cells to promote the EAG spirit. The torch relay ended when the fifth pair of torch bearers returned to the basketball court.

A rally ceremony of the EAG volunteer group from CCCI followed the torch relay. 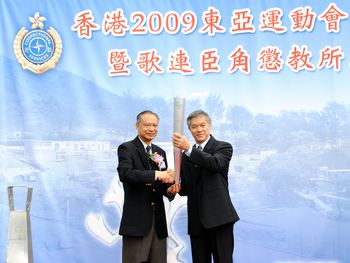 Rehabilitation Ambassador and triathlon, Mr Lee Chi-wo together with an inmate torch bearer, run in the torch relay.