A total of 63 inmates were presented with academic certificates at a ceremony in Stanley Prison today (January 13) in recognition of their academic achievements.

They obtained a total of 105 certificates in public examinations with 36 distinctions and credits, and 69 passes in the Hong Kong Certificate of Education Examination, City & Guilds of London Institute Examinations and LCCI International Qualifications Examinations, as well as 290 credit points awarded for 39 courses of the Open University of Hong Kong. Even more encouraging: An inmate was awarded a Bachelor degree in Business Administration (Chinese) by the Open University.

In the past year, 139 prisoners from Stanley Prison sat examinations for various academic qualifications.

Presenting certificates to the inmates, the Chairman of the Southern District Fight Crime Committee, Mr Ko Kam-cheung, commended the Correctional Services Department (CSD) for providing inmates with a good study environment, so that they could continue to pursue their education in order to regain self-confidence and get onto the right track.
??
"I understand that the department has made various efforts to encourage inmates to pursue further studies. For example, it organises the 'Rainbow Reading Award Scheme' and 'A Taste of University' in various adult institutions in order to promote reading and continuous education at university level among inmates," he said.
??
"Vocational training and computer application courses are conducted in the Industries and Vocational Training Building in Pik Uk Prison opened early this month to facilitate inmates' preparation for reintegration into society with recognised qualifications," Mr Ko added.

He encouraged inmates to further pursue their aspirations for a brighter future.

Also attending the ceremony were parents of the inmates, representatives of community organisations and celebrities, as well as the Commissioner of Correctional Services, Mr Kwok Leung-ming.

The department provides half-day compulsory education programmes and half-day vocational training for young offenders under age 2l. Guidance and assistance are in place for adult offenders who participate in studies on a voluntary basis. 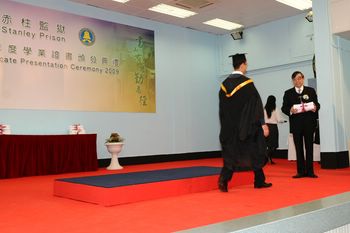 An inmate who obtained a Bachelor degree in Business Administration (Chinese) from the Open University of Hong Kong receives certificates from Mr Ko Kam-cheung, Chairman of the Southern District Fight Crime Committee, on behalf of other candidates.