The lighting ceremony of a TV variety show, "Support Offender Rehabilitation for a Safer and More Inclusive Society" organised by the Correctional Services Department (CSD) was held today (January 29).

The show will be broadcast on Jade Channel and High Definition Channel of Television Broadcasts Limited on February 6 (Saturday) at 9.30pm. A series of five one-minute programme describing the changes of correctional work and latest developments, is also scheduled for broadcast from February 1-5 (Monday to Friday) at 7.30pm on the same channels.

"Support Offender Rehabilitation for a Safer and More Inclusive Society" is among a series of rehabilitation-related publicity events organised by CSD. The programme aims at promoting community acceptance of and support for rehabilitated offenders so that they can re-integrate into society as law-abiding citizens. This will help Hong Kong become a safer and more inclusive society.

Officiating at the lighting ceremony, the Secretary for Justice, Mr Wong Yan Lung, SC, said, "Whether offenders can successfully rehabilitate depends not only on their own determination and family support, but also the forgiveness and understanding of the community.”

He thanked all those who cared, including correctional staff who helped rehabilitated offenders to lead a new life. 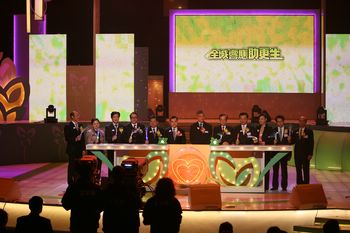