CIC reverts to the Immigration Department

The Government announced the use of Castle Peak Bay Immigration Centre (CIC) as a place of detention, and transfer the management of it from Correctional Services Department (CSD) to Immigration Department (ImmD) with effect from today (April 15).

The CIC commenced operations in May 2005. It provides 400 places for detaining immigration detainees who are awaiting repatriation or deportation under the Immigration Ordinance. Owing to the then manpower situation of CSD and ImmD, the two departments signed an agreement under which CSD took charge of the management of the CIC for the first five years.

Announcing CIC's transfer of management, a Government spokesperson said: "The two departments have since last year been working closely on the transitional and training arrangements with a view to ensuring a smooth handover of the CIC."

"Members of Immigration Service are ready to take up the new challenge and duties in sustaining the professional and effective management of the centre, as what their Correctional counterparts have done before the transfer," the spokesperson added.

The CSD plans to release its manpower to other (including redeveloped) penal facilities after handing over the management of the CIC to ImmD. 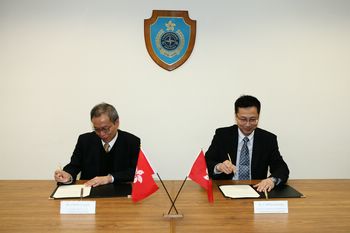 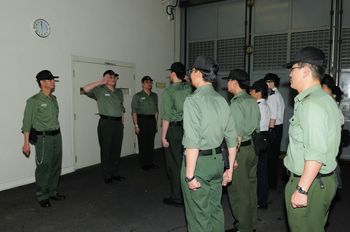 The last batch of correctional staff and their head, Superintendent Mr Kan Chi-sing (second left), exchange salutes at the end of their service at Castle Peak Bay Immigration Centre. 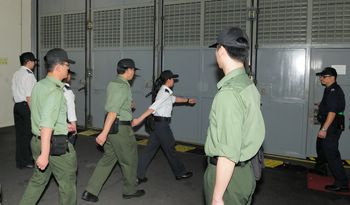 The last batch of correctional staff march out from the Castle Peak Bay Immigration Centre at midnight.