The Chairman of the Public Service Commission, Mr Nicholas Ng, today (April 26) commended the Correctional Services Department (CSD) for being an excellent and caring disciplined team.

Speaking at a passing-out parade at the department's Staff Training Institute, Mr Ng said, "Correctional work is meaningful and challenging. In addition to upholding a high standard of conduct and discipline, you have to enforce the law by supervising inmates from all walks of life, and at the same time, to promote rehabilitation activities with a caring attitude so as to guide inmates to positive changes."

He also commended correctional staff for their enthusiasm in using their spare time to engage in charitable activities. He said, "The CSD is awarded the 'caring organisation' logo for the fifth consecutive year by the Hong Kong Council of Social Service and was presented the Total Caring Award two years ago."

On rehabilitation services, Mr Ng said, "At present, over 70 non-government organisations have joined with CSD in the provision of rehabilitative services, showing support for and recognition of the department's services from various sectors of the community."

"The department is also much concerned about the welfare of its staff.  The 'healthy and balanced lifestyle' it is promoting provides positive energy for staff members' physical and mental health, family harmony and team spirit," he added.

Mr Ng encouraged the passing-out officers to fight for their beliefs, continue to learn and accept challenges when encountering difficulties. 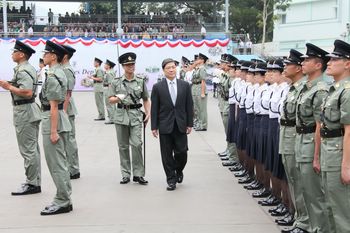 The Chairman of the Public Service Commission, Mr Nicholas Ng, inspects a contingent of correctional officers at a passing-out parade. 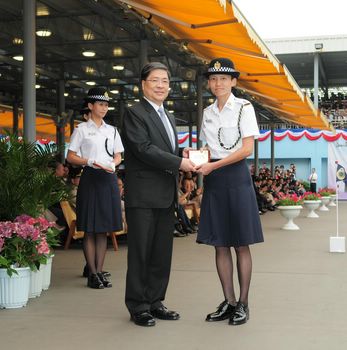