Over 200 employers and representatives from 80 companies, social enterprises and commercial chambers today (June 10) attended a symposium to discuss employment opportunities for rehabilitated persons.

Entitled "Fair Employment Opportunities for Rehabilitated Persons", the symposium aimed to call on the public and employers to give equal opportunities to rehabilitated persons, thereby facilitating their re-integration into society as law-abiding citizens.

The symposium was jointly organised by the Correctional Services Department (CSD), the Centre for Criminology of the University of Hong Kong (HKU) and the Merchants Support for Rehabilitated Offenders Committee Limited.

The Head of HKU's Centre for Criminology, Professor Karen Laidler, said at the symposium that helping offenders to develop good work habits and foster a positive work attitude, as well as providing them with opportunities to acquire employable skills had been at the core of the CSD's mission of offender rehabilitation.

"Yet it does not stop there. Successful reintegration requires employment in the community. Rehabilitated persons need an opportunity to become productive members of society, and care and continuous support of employers for them are very important in helping to build a productive and harmonious future of not only the ex-offenders, but also our society," Professor Laidler added. "Hong Kong, as a fair society, can offer equal opportunity for all people living here."

The CSD has teamed up with the Society of Rehabilitation and Crime Prevention, Hong Kong (SRACP), whereby the SRACP will provide follow-up employment services for adult offenders completing pre-release vocational training.
??
Between May 2009 and April 2010, a total of 381 rehabilitated persons were released from penal institutions after completing pre-release vocational training. Among them, 299 voluntarily received follow-up employment service offered by the SRACP. Their employment rate, defined as being successfully employed within six months after release, was 82.6%.

In the symposium, academics, businessmen and government representatives exchanged views on the importance of work for rehabilitated persons and their actual experience in hiring them, as well as the role of CSD supervision staff in matching them with employers. Three young supervisees talked about their path to rehabilitation.
??
Also attending the symposium were the Commissioner of Correctional Services, Mr Kwok Leung-ming; HKU's Associate Deans of the Faculty of Social Sciences, Professors Lui Tai Lok and Professor John Bacon-Shone; Chief Executive President of the Merchants Support for Rehabilitated Offenders Committee Limited, Mr Siu Chor-kei; and members of the Committee on Community Support for Rehabilitated Offenders. 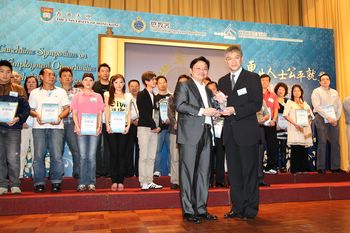 The Commissioner of Correctional Services, Mr Kwok Leung-ming (right), presents a gold award to a representative from one of five companies, Luk Yu Tea House, Full Art Dry Cleaning Company, Tai Wah Restaurant, Family's Laundry and Tung Sum Restaurant, to honour them for offering jobs to rehabilitated persons. These firms not only provided jobs and guidance to rehabilitated persons, but also showed concern to their families and friends and helped them to build a healthy lifestyle. 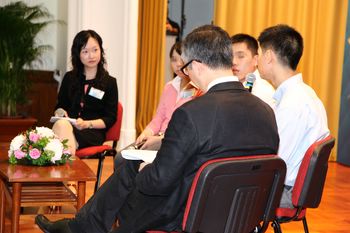 Three rehabilitated persons at the employment symposium share their experiences of job seeking.