The Correctional Services Department (CSD) tested its emergency response on disturbances today (November 17) during an exercise at Tai Lam Centre for Women.

Code-named Concord XI, the seven-hour exercise tested the command and communication capability of the department during an emergency situation, the implementation of different levels of contingency plans, and the mobilisation of departmental-level response capability.

It also tested CSD's co-ordination with the Hong Kong Police Force (HKPF) and Fire Services Department (FSD) as both departments responded to requests for assistance.

The exercise featured a number of differing scenarios involving inmates escaping from the institution, attacking staff and taking hostages, as well as inmate threatening to jump from a height with her baby. More than 200 participants from CSD, HKPF and FSD took part in the exercise.

Mr Law said the exercise provided an opportunity for the department to test its readiness in emergency response, the correctness and timeliness of commands, as well as co-ordination and co-operation with relevant parties.

He said: "I can see that every member of the exercise is making a great effort to face the challenge with professionalism, providing immediate response and keeping the operation of the institution smooth.

"In view of people's rising expectations, the work of correctional staff is demanding. I believe that they will continue to do their best and be professional in helping Hong Kong to be one of the safest cities in the world, as reflected in the department's 'Vision, Mission and Values'. "

Mr Law added that an assessment and debriefing would be conducted to review the response plan and the communication flow, in order to identify areas for further improvement. 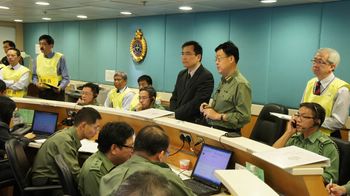 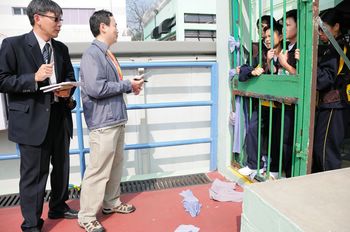 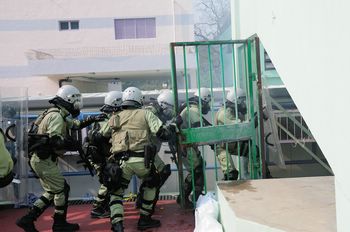 A Correctional Emergency Response Team of the Escort and Support Group breaks into a dormitory to save a hostage.