A total of 89 inmates were presented with academic certificates in a ceremony at Shek Pik Prison (SPP) today (November 24) in recognition of their academic achievements.

In the past year, 177 inmates from SPP completed various courses and passed in 243 examination papers. They sat for a variety of examinations organised by the Open University of Hong Kong, Hong Kong Examinations and Assessment Authority and the City and Guilds, on subjects including languages, mathematics, business, information technology and accounting. One of the recipients has been awarded a Bachelors Degree in Computing by a local university.

Those who received certificates today obtained a total of 74 distinctions and credits, and 61 passes.

Presenting the certificates to the inmates, the Vice Chairman of the Islands District Council, Ms Chau Chuen-heung, expressed her appreciation for the Correctional Services Department (CSD)'s support to inmates as well as inmates' devotion to life-long learning, despite their long prison sentences.

She said that the Islands District Council would enhance co-operation with the CSD in the days to come so as to help Hong Kong be one of the safest cities in the world.

Also attending in the ceremony were representatives of community organisations and celebrities, as well as the Commissioner of Correctional Services, Mr Sin Yat-kin.

As part of its continuous efforts to rehabilitate offenders, the department encourages adult offenders to pursue studies after their work. It provides assistance, through CSD staff and volunteers, to those who voluntarily participate in educational activities. 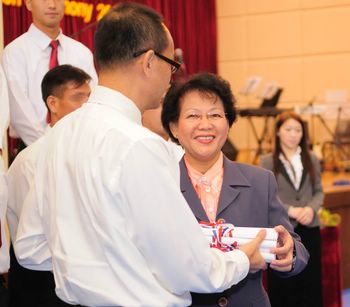