The Financial Secretary, Mr John C Tsang, today (December 17) commended the Correctional Services Department (CSD) for its commitment to respect the rule of law, uphold high standards of integrity and exercise professionalism in providing quality services for the community.

Speaking at a passing-out parade at the department's Staff Training Institute, Mr Tsang said that as an integral part of the criminal justice system of Hong Kong, the CSD is tasked to detain persons committed to its custody in a secure, safe and humane manner as well as to provide them with suitable and comprehensive rehabilitative services.

He said: "To improve the custodial environment, the CSD completed the redevelopment of Lo Wu Correctional Institution in mid-2010.  The provision of 1,400 penal places there has effectively alleviated the overcrowding problem of female prisons in the past.  The design of the new institution has incorporated environmental protection concepts.  This is to echo the Government's objectives of 'Caring for Environment, Caring for the Community and Caring for People', as well as promoting environmental protection awareness in public finance management."

On rehabilitation work, Mr Tsang said he was delighted to learn that more than 80 religious groups and non-government organisations are collaborating closely with the department in providing a wide range of services for rehabilitated persons, including employment and educational support.

"These services facilitate the rehabilitated persons' reintegration into the community, thereby contributing to the implementation of the Policy Agenda initiative of 'Investing for a Caring Society'," Mr Tsang said.

He praised CSD staff members for their efforts in enhancing the penal system, earning the trust and recognition of the public.

He said: "Despite their heavy workload, staff members of the CSD have actively engaged in charitable activities and voluntary services in their spare time. It is highly commendable that the Department has been awarded the 'Caring Organisation' logo for the fifth consecutive year and the Total Caring Award by the Hong Kong Council of Social Service for its valuable contributions."

Mr Tsang said he was confident that the passing-out members would do their best to embrace the challenges ahead, uphold the spirit of the CSD and contribute to the stability of Hong Kong. 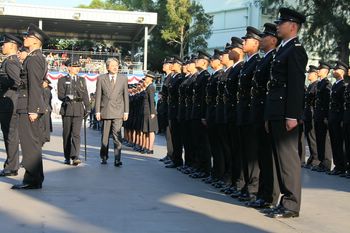 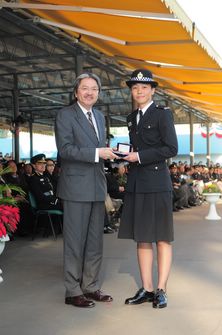