An inmate of Stanley Prison was awarded a Country Silver Medallion by the London Chamber of Commerce and Industry (LCCI) Examinations Board in recognition of his outstanding performance in the subject of Business Calculations (Level 2) in the 2010 LCCI exams.

The Country Silver Medallion was awarded to the inmate, surnamed Lai, who achieved the second highest marks among the more than 300 Hong Kong candidates that participated in the exam. Mr Lai's family members received the medallion on his behalf at an LCCI Medallion Awards Ceremony held earlier.

Mr Lai, with an educational level of secondary three, said he was delighted to receive the award. He said: "This award reflects the support of my family, the encouragement and guidance given by staff of the institution as well as resources provided by the institution and outside organisations.

"Under the encouragement and guidance of staff of the institution, I learnt about the importance of self-enhancement and other appropriate values. I have also regained my confidence."

Commenting on the award, Assistant Commissioner of Correctional Services (Rehabilitation), Mr Lee Sheung, today (May 12) said: "This outstanding result reflects the inmate's perseverance in studies. Apart from the safe and secure custodial environment provided by the Correctional Services Department (CSD) so that inmates can study at ease, family support as well as the assistance given by the community should all be recognised."

The CSD provides comprehensive rehabilitative services to its inmates and encourages adult inmates to pursue studies during their spare time. Those who have financial difficulties may apply for relevant subsidies, such as from the "New Life Foundation". A philanthropist donated $900,000 in 2009 to set up the fund to subsidise inmates in taking vocational training courses and public examinations. Mr Lai's examination fee was paid by this fund.

The 41-year-old inmate began serving a life imprisonment sentence in 1997 on a charge of murder. 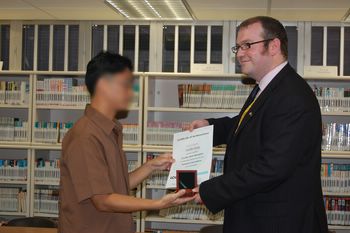 Representative of London Chamber of Commerce and Industry Examinations Board, Mr Luke Wales, presents a certificate to inmate Mr Lai in Stanley Prison.