The kick-off ceremony of a charity rice dumpling sale was held today (May 28) to call on people to help those in need while they are enjoying their delicious rice dumplings.

The charity sale is jointly organised by the Correctional Services Department (CSD) and Ocean Empire Food Shop to raise fund for the Prisoners' Education Trust Fund. The event also aims at calling on the community to care for offenders and support their studies as they have to prepare themselves for re-integration into society.

Ocean Empire Food Shop has donated 2,000 rice dumplings and donors who bought these dumplings will pass them to inmates, rehabilitated offenders and Oi Kwan Volunteer Group composed of CSD staff and their family members, for their distribution to homes for the aged and single elderly as well as special schools. Eventually, a total of 2,000 people from various sectors will be benefited from the care given by the community.

Speaking at the kick-off ceremony, the Commissioner of Correctional Services, Mr Sin Yat-kin pointed out: "Public acceptance and support are important elements for rehabilitated offenders to re-integrate into society. The Correctional Services Department therefore always appeals for public acceptance of rehabilitated offenders through public education, publicity and organising promotional activities. The donation of all income raised by Ocean Empire Food Shop from the sale of these rice dumplings to the Prisoners' Education Trust Fund is one of the examples responding to our calls. The Trust Fund is mainly used on providing offenders educational resources and financial assistance in their studies. "

"The department is celebrating the 90th anniversary and 'Give Rehabilitated Offenders A Chance' is our main publicity theme this year. Offenders also want to contribute to the community and show their determination to rehabilitate. I hope the public can give them a chance to show their talent and contribute in building a harmonious community together with you. "

Managing Director of Ocean Empire Food Shop, Mr Caecage Siu, said most of the rehabilitated offenders he met were willing to learn and hard-working. He had also seen many examples of rehabilitated offenders successfully reintegrated into society. Mr Siu called on the public to believe in the determination of the offenders to change and give them a chance to turn a new leaf.

Apart from the presentation of souvenirs to those who had donated more than $5,000 in the charity sale, the kick-off ceremony included rice dumplings-making competition among artistes, performances by Hong Kong Scout Orchestra and various singers, appeal made by Rehabilitation Ambassador, Mr Chan King-yin, sharing talks of beneficiaries; djembe performance by Cape Collinson Correctional Institution and magic show.

Officiating guests at the ceremony were the Chairman of Advisory Board of Yan Chai Hospital, Mrs Tang Yew Zoe-chi and the wife of Secretary for Security, Mrs Susan Lee. 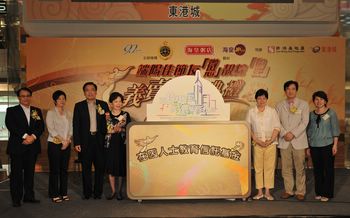