The Correctional Services Department (CSD) today (August 3) held for the first time a "Give Rehabilitated Offenders A Chance" job fair for inmates who are soon to be released.

The job fair is jointly organised by the CSD and the Merchants Support for Rehabilitated Offenders Committee Limited. Launched at Pik Uk Prison, the job fair provides employment opportunities and assistance to inmates who will be released within three months. The fair can help inmates find jobs before release and enter the job market as soon as they leave the institution. They are then able contribute to society as law-abiding citizens.

Speaking at the launch ceremony, the Commissioner of Correctional Services, Mr Sin Yat-kin, thanked the Merchants Support for Rehabilitated Offenders Committee Limited for its help in mobilising the community's support, calling on employers from the business sector to eliminate misunderstandings about inmates and giving a chance to rehabilitated offenders.

Mr Sin called on the community to support the work of helping offenders to rehabilitate. He cited examples of employers giving rehabilitated offenders equal employment opportunities.

Dr Leung said he hoped inmates and rehabilitated offenders could learn from attending the job fair that their days ahead would be brighter if they made an effort and seized the opportunity.

Twenty-six business organisations participated in the job fair, offering a total of 243 jobs in retailing, food and beverage, electrical and mechanical engineering, construction and transportation. A total of 204 job applications have so far been received from 187 inmates. The CSD will arrange for employers to visit correctional institutions in person or to use video conferencing facilities to interview interested inmates. 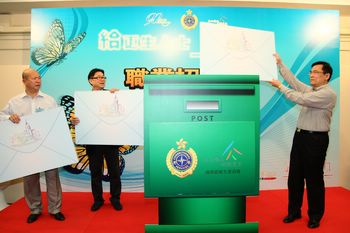