Young inmates at Cape Collinson Correctional Institution (CCCI) were today (August 31) presented with academic and vocational training certificates at a ceremony in recognition of their efforts and achievements.

A total of 94 candidates from the institution sat for various academic and vocational examinations in the past 12 months. Among the 338 certificates obtained, 86 were merit certificates.

Today, 36 inmates were presented with 135 certificates. They obtained 27 distinctions and credits, as well as 108 passes, in the City and Guilds of London Institute Examinations, the Hong Kong Certificate of Education Examination and the examinations organised by the Construction Industry Council Training Academy.

Speaking at the certificate presentation ceremony, the Chairman of Eastern District Council, Ms Christina Ting, said, "The Correctional Services Department (CSD) provides education and vocational training to its inmates within the correctional institutions who have gone astray in the past, supplemented with moral cultivation, so that they have a chance to re-learn and introspect. The department's ultimate goal is to help inmates re-integrate into society and be self-reliant, as well as enhance their abilities in further education and employment after release."

She said the achievements of the inmates for this year testified not only to their own continuous efforts, the hard work of CSD teaching staff and the positive results of correctional work, but also to the care and support that the inmates' parents have given.
??
With the implementation of the New Senior Secondary curriculum, the CSD has offered four core subjects (Chinese language, English language, mathematics and liberal studies) and two elective subjects (economics as well as tourism and hospitality studies) for young inmates at its relevant correctional institutions. CCCI has recently set up the New Senior Secondary curriculum to train inmates to sit for the first Hong Kong Diploma of Secondary Education Examination in 2012.

Also taking part in the ceremony were parents of the inmates, representatives of community organisations and celebrities, as well as the Commissioner of Correctional Services, Mr Sin Yat-kin.

Situated at 123 Cape Collinson Road, Chai Wan, CCCI has a capacity of 192 penal places for young male offenders aged from 14 to under 21 who are ordered by court to undergo the training centre programme for an indeterminate period of six months to three years.

The department provides half-day compulsory education programmes and half-day vocational training for young offenders under 2l years old. Guidance and assistance are also in place for adult offenders who participate in studies on a voluntary basis. 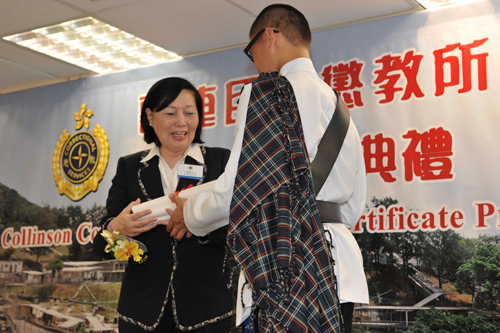