The launch ceremony of a charity mooncake sale was held today (September 3) to call on people to enjoy delicious charity mooncakes and in the process help inmates continue their studies.

The charity sale is organised by the Correctional Services Department (CSD), sponsored by Hong Kong Canteen and supported by the Phoenix Charitable Foundation, and is being held to raise funds for the Prisoners' Education Trust Fund. The event also aims at calling on the community to care for inmates and support their studies as they have to prepare themselves for re-integration into society.

Hong Kong Canteen has donated 2,000 mooncakes priced at $50 each and all the proceeds will be contributed to the Prisoners' Education Trust Fund. Donors who bought these mooncakes will generously pass them to inmates, rehabilitated offenders and the Oi Kwan Volunteer Group composed of CSD staff and their family members, as well as the Phoenix Charitable Foundation Youth Volunteer Group, for their distribution to homes for the aged, special schools, singleton elderly and new arrivals. Eventually, people from various sectors will benefit from the care given by the community.

Apart from the presentation of souvenirs to those who had subscribed for a certain amount of mooncakes in the charity sale, the launch ceremony included performances by various artistes and singers, as well as sharing talks by beneficiaries.

Prisoners can apply for financial assistance from the Prisoners' Education Trust Fund for payment of fees for courses offered by external bodies including tertiary education institutions, and to sit for public examinations leading to qualifications.

Officiating at the launch ceremony were the Director General of the Hong Kong Island Sub-office, Liaison Office of the Central People's Government in the Hong Kong Special Administrative Region, Mr Wu Yangwei; the Chairman of the Phoenix Charitable Foundation, Dr Lee Yuk-lun; the Director of Hong Kong Canteen, Mr Ng Kwok-wing; and the Commissioner of Correctional Services, Mr Sin Yat-kin. 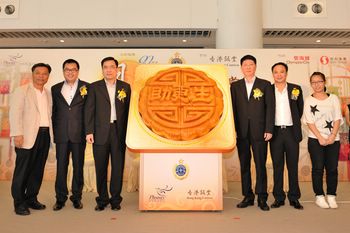