The Correctional Services Department (CSD) today (October 18) launched "Shall We Talk", an audio programme for broadcasting, in Pik Uk Correctional Institution (PUCI). The launching ceremony marked the beginning of a new rehabilitation service provided by the department for young inmates.

The programme is produced by young inmates of PUCI, who are also the disc jockeys, under the guidance of voluntary band teacher Ms Nancy Loo and correctional officers in the Audio-Visual Studio located inside the institution. The programme includes the broadcasting of songs, interviews with guests, a radio drama entitled "Take Two in Life" and an interest workshop. Rehabilitation elements have been added to the programme while the melodies and lyrics of songs can arouse positive energy.

Speaking at today's launching ceremony, the guest host of one of the episodes, Ms Chea Shuk-mui, said producing an audio programme is a tough job as a lot of time and effort is involved in drawing up the content outline of each episode, preparing the scripts and recording as well as completing the post-production work. However, Ms Chea said she has found it a worthwhile job because the programme can promote a rehabilitation message, help mould positive values among young inmates and encourage them to turn over a new leaf.

Ms Chea said she hoped that the programme could prompt young inmates to reflect on their values, bring about changes in their lives and become a platform for promoting messages on offender rehabilitation.

The Assistant Commissioner of Correctional Services (Rehabilitation), Mr Lee Sheung, said that during the planning stage of the broadcasting programme, which lasted for more than a year, the department received help from various organisations. The assistance included the donation of musical instruments and recording equipment by Fung Ying Seen Koon, the installation of musical instruments and technical support provided by Tom Lee Music Co Ltd, and the exemption of copyright for songs by the Composers and Authors Society of Hong Kong. Meanwhile, PUCI's voluntary band teacher Ms Loo agreed to give guidance in the studio throughout the production.

The Audio-Visual Studio in PUCI was completed in January 2011.

Mr Lee said, "Well-known figures from various sectors and businesses have been interviewed in 'Shall We Talk'. They include renowned band Sugar Club, Outstanding Young Person Mr Lui Yue-chun, composers Mr Anthony Lun and Mr Peco Chui, and band teacher Mr Alex Tam. Famous athletes such as cyclist Mr Hung Chung-yam, Paralympic Games athlete Ms Yu Chui-yee, squash athlete Ms Chiu Wing-yin and the Headmistress of Apprentice Jockeys' School, Ms Amy Chan, have also been interviewed. We hope that young inmates will be motivated by the personal experiences of these guests and their stories on how they overcame difficulties.

"The segment 'Take Two in Life' is a radio drama encouraging inmates to rehabilitate. Through writing the scripts for this drama, inmates of PUCI share their own experiences with other young inmates in the hope that all will self-reflect and stop recommitting.

"In the interest workshop segment, the disc jockey will talk about interesting words or literature as well as current affairs to let fellow inmates know more and broaden their horizons."

Following the launching ceremony, a one-hour-long episode of "Shall We Talk" will be broadcast in the CSD's institutions for young inmates once every two weeks. 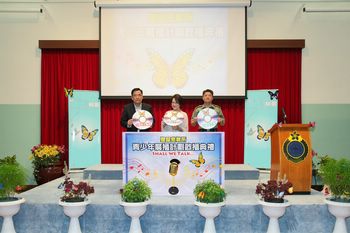