The Earl of Wessex, Prince Edward, visited Cape Collinson Correctional Institution (CCCI) today (November 3) to see for himself the facilities, training and services provided by the Correctional Services Department (CSD) with an emphasis on people orientation. He toured various workshops, talked to young inmates therein and listened to a briefing on the programme provided to them under the Hong Kong Award for Young People, formerly known as the Duke of Edinburgh's Award. 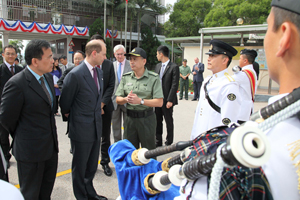 Picture (1) shows the marching band of CCCI welcoming Prince Edward. On his right is the Commissioner of Correctional Services, Mr Sin Yat-kin, and the Superintendent of CCCI, Mr Hui Cho-hang, is on his left. 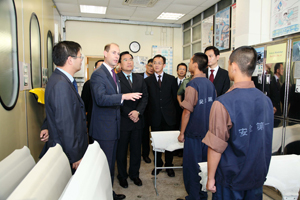 Picture (2) shows Prince Edward talking to inmates in the Vehicle Painting Workshop in Cape Collinson Correctional Institution to learn more about their learning progress. On his left is Mr Sin. 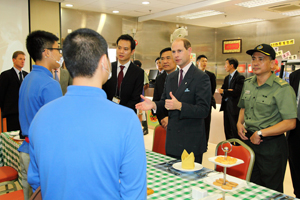