With the concerted efforts of the Correctional Services Department (CSD), non-governmental organisations (NGOs) and volunteers, rehabilitated offenders have received substantial help and support for their reintegration into society, the Chairman of the Committee on Community Support for Rehabilitated Offenders, Mr Herman Hui, said today (November 12) at the launch ceremony of the NGO Service Day.

The event was organised by the CSD and, in connection with the department's 90th anniversary, the theme for this year is "Together We Grow and Foster Rehabilitation Services".

Mr Hui said, "Over the years, the CSD has not only made continuous efforts in enhancing co-operation with NGOs in the provision of support and counselling services to inmates and rehabilitated offenders, but has also engaged various religious groups to offer religious services to inmates to cater for their spiritual needs.

"The department's work both shapes a harmonious environment at institutions and allows inmates to experience the care of society - a way to achieve a good balance between penalties and rehabilitation in response to expectations of the general public."

About 200 volunteers and staff members from 15 NGOs attended the ceremony today. They then headed off to various correctional institutions to provide rehabilitation services to inmates to encourage them to turn over a new leaf and get back on the right track.

In addition to the work of the NGOs, the CSD established a CSD Rehabilitation Volunteer Group in 2004. The group, currently comprising around 200 members from all walks of life, provides more than 1 000 rehabilitative activities and services in various correctional institutions. These include language courses, computer studies and cultural pursuits.

Also officiating at today's ceremony were the Commissioner of Correctional Services, Mr Sin Yat-kin; the Bishop of Hong Kong, the Most Rev John Tong; the President of the Society of Rehabilitation and Crime Prevention of Hong Kong, Mr Justice Pang Kin-kee; the Chairman of the Hong Kong Chinese Christian Churches Union, the Rev Chung Ka-lok; the Vice President of the Confucian Academy, Mr Lui Tin-tsang; the Vice Chairman of the Hong Kong Taoist Association, Mr Leung Tak-wah; the Chief Secretary of the Buddha's Light International Association of Hong Kong, Ven Man Lan; the Chief Imam of the Incorporated Trustees of the Islamic Community Fund of Hong Kong, Mufti Muhammad Arshad; and the Rehabilitation Ambassador, Miss Sherry Tsai. 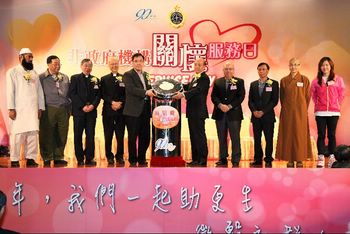 Picture shows the Commissioner of Correctional Services, Mr Sin Yat-kin (fifth left), and Chairman of the Committee on Community Support for Rehabilitated Offenders, Mr Herman Hui (fifth right), closing a time capsule after other officiating guests have placed souvenirs with blessings into it. The time capsule will be placed in Hong Kong Correctional Services Museum and opened in 2021. 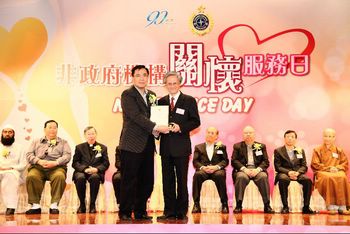 Picture shows the Commissioner of Correctional Services, Mr Sin Yat-kin (left), presenting the Commissioner of Correctional Services Partnership Award to Mr Chan Wai-to who has been promoting voluntary services for rehabilitated offenders since 1992. Mr Chan is currently a Vice-chairman of the Executive Committee, the Society of Rehabilitation and Crime Prevention, Hong Kong.