A variety show, "Support Offender Rehabilitation for a Safer and More Inclusive Society", jointly presented by the Correctional Services Department (CSD) and Television Broadcasts Limited (TVB) will screen on the Jade and HD Jade channels this Saturday (December 3).

The show, riding on the CSD's 90th anniversary and its four-episode drama series broadcast earlier on the two Jade channels, features the development of the department's role from custodial management to the provision of both custodial and rehabilitative services over the years.

"With its robust judiciary system and internationally acclaimed disciplinary forces, Hong Kong is among the world's safest metropolitan cities. The CSD is responsible for custodial management and provision of rehabilitative service provision, with a view to assisting the rehabilitated persons in smoothly reintegrating into the community. This hinges on not only rehabilitated persons' steadfast determination and effort, but also encouragement and acceptance from the public," the Chief Secretary for Administration, Mr Stephen Lam, said while officiating at the show's lighting ceremony this evening (December 1).

Mr Lam appealed to members of the public to support offender rehabilitation and help demonstrate Hong Kong's spirit of harmony and inclusiveness.

The Commissioner of Correctional Services, Mr Sin Yat-kin, added, "As the department enters its 90th year of establishment, its work has been evolving toward the betterment of both custodial and rehabilitation facilities for inmates. We hope rehabilitated offenders will be able to reintegrate into society smoothly and contribute to the community."

Mr Sin said that with the support of the community as well as the 15 supporting organisations that contributed to the show, the objective of a "Safer and More Inclusive Society" could be achieved.

The variety show is scheduled for broadcast this Saturday at 9pm on TVB's Jade and HD Jade channels. The programme includes performances by popular singers, as well as a CSD 90th anniversary theme song presented jointly by singers and an inmate band, with lyrics on rehabilitation composed by inmates. 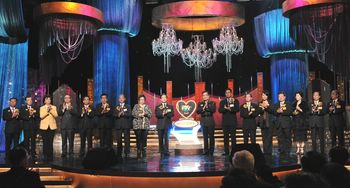