The President of the Legislative Council, Mr Jasper Tsang, today (December 16) commended the Correctional Services Department (CSD) for its arduous efforts and tremendous responsibility in delivering both custodial and rehabilitation services.

He said he was impressed by the department's commitment to respecting the rule of law, upholding high standards of integrity and exercising professionalism in the provision of quality services to the community.

Addressing the passing-out parade at the department's Staff Training Institute today,
Mr Tsang noted that this year is the 90th anniversary of CSD's establishment.

He said the development of the prison system in the territory had undergone significant changes over the past nine decades. One hundred and seventy years ago, the Hong Kong Gaol and Police were under the same authority. From December 1920, prisons came under the charge of the then Prisons Department, now known as the CSD.

"In the past, the CSD was mainly tasked to manage the persons in custody by supervising their discipline and maintaining good order in correctional institutions. Nowadays, the department not only provides a secure, humane and suitable correctional environment for inmates, but also collaborates with the public and over 80 organisations in giving comprehensive rehabilitation services to persons in custody so as to help them return to the right path," he said.

On rehabilitation work, Mr Tsang said he was delighted to learn that in August 2011, the CSD held for the first time the "Give Rehabilitated Offenders a Chance" Job Fair at Pik Uk Prison. Twenty-six business organisations supported and participated in the job fair, offering more than 200 jobs.  Interviews were arranged on site for inmates who were to be released soon so that they could be provided with job opportunities.

"These services help rehabilitated persons reintegrate into the community faster, thereby reducing their chances of re-offending, and the whole community will benefit."

Mr Tsang added: "Over the years, CSD staff and their families have actively engaged in community services in their spare time and extended their care to the disadvantaged.

"The department has been presented with the 'Caring Organisation Logo' for the sixth consecutive year and the 'Total Caring Award' by the Hong Kong Council of Social Service.  Recently, the Oi Kwan Volunteer Group, which comprises CSD staff members and often organises charitable activities to help the needy, was also presented by the Agency for Volunteer Service 'The Fourth Hong Kong Volunteer Award'. These awards are recognition of the enthusiastic participation of CSD staff."

Mr Tsang said he was confident that the passing-out members would be able to uphold the professionalism, integrity and fine tradition of the department in executing their duties in the days to come and making contributions to the building of a safer and more inclusive society. The President of the Legislative Council, Mr Jasper Tsang, inspects a contingent of correctional officers at the passing-out parade today (December 16). 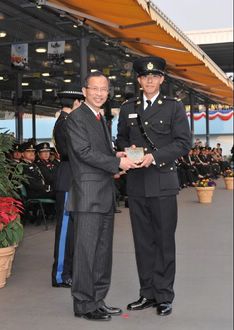 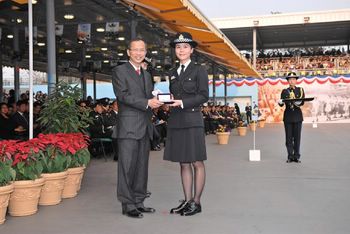