The Correctional Services Department (CSD) today (December 21) tested its emergency response for immediate evacuation in the scenario of a dam break in the vicinity of Shek Pik Prison, Lantau Island.

Code-named Concord XII, the three-and-a-half-hour exercise tested the command and communication of the department during an emergency situation, the implementation of different levels of contingency plans, the mobilisation of departmental-level response and the dissemination of information to parties concerned.

It also tested the CSD's co-ordination with the Hong Kong Police Force (HKPF) and the Government Flying Service (GFS) as these departments responded to requests for assistance and logistic support at a remote prison on Lantau.

The exercise featured a number of differing scenarios including a medical emergency situation and inmate commotion and escape.

More than 200 participants from the CSD, HKPF and GFS took part in the exercise.

Mr Tang said the exercise provided an opportunity for the department to test its readiness in emergency response, the correctness and timeliness of commands, as well as co-ordination and co-operation with relevant parties.

"The GFS also deployed helicopters to provide emergency air lift in the exercise. Together with colleagues from the Police, their participation enabled the operation to run more smoothly and effectively," he said.

He said the exercise would enhance the response capabilities and professionalism of frontline staff and inter-departmental communication in the event of a crisis.

"In view of people's rising expectations, the work of correctional staff is demanding. I believe that my colleagues will continue to do their best and demonstrate their professionalism in helping Hong Kong continue to be one of the safest cities in the world."

Mr Tang added that an assessment and debriefing would be conducted to review the response plan and communication flow of this exercise so as to follow up in areas where further improvement is needed.

The CSD holds regular emergency exercises of various natures and on different scales, including institutional, regional and departmental levels. 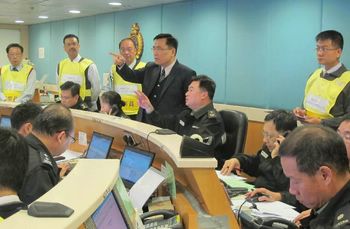 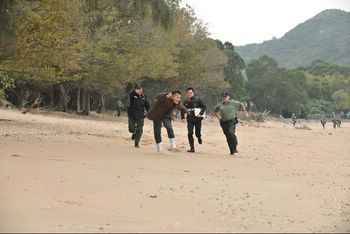 Correctional Services staff chase a simulated escapee in one of the scenarios featured in the exercise. 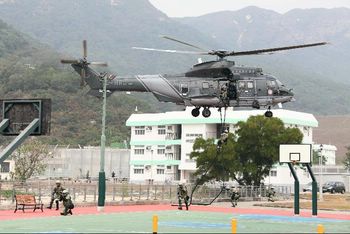 With the help of Government Flying Service, staff of the Correctional Emergency Response Team participate in the exercise.