The Putonghua class was jointly organised by the Tung Tau Correctional Institution and a volunteer Putonghua tutor, Mr Tom He with sponsorship from Honorary Consultant of Merchants Support for Rehabilitated Offenders Committee Limited, Dr Chan Tung. The programme was launched in July 2011 to provide Elementary Putonghua Hobby Class to inmates through special memory techniques and high resolution videos. An Advanced Putonghua Hobby Class was also organised for the inmates since December last year.

Dr Chan presented the certificates to the inmates today and commended them for the efforts they made in their study.

At the presentation ceremony, Commissioner of Correctional Services, Mr Sin Yat-kin and another officiating guest, Chairman of the Long-term Prison Sentences Review Board, Mr Peter Nguyen, encouraged the inmates to put into practice what had been learnt as an endeavor to serve the community.

The CSD has long been providing a conducive environment to encourage inmates to participate in learning in order to prepare for their eventual re-integration with the society. 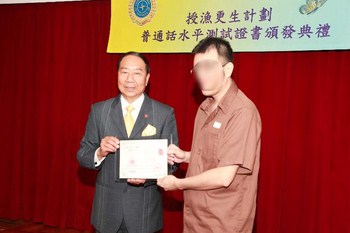