The Correctional Services Department has emphasised the independence of its urine tests for inmates, saying the results cannot be tampered with. (Video)

Explaining the system to the media today, Assistant Commissioner Lam Kwok-leung said the department has five urine test centres to detect drug-taking amongst prisoners and inmates released under supervision.

Urine samples are usually collected in prison hospitals under the watch of staff.

Collected in a plastic container, they are labelled with a bar code and locked in a metal box. Tests must be conducted within 24 hours of the samples' arrival. A computer system records details such as times and staff names for tracing purposes.

Each sample is labelled with a bar code and put into an analyser. A result is generated in six to eight minutes. If a positive result is found, the computer system sends an email to the head of the institution where the sample came from.

Staff use a disposable plastic container to collect samples from inmates. The lid has a special design in which the plastic seal breaks when someone tries opening it. The design stops people from trying to switch samples.

The centres are used to test about 380,000 urine samples a year. 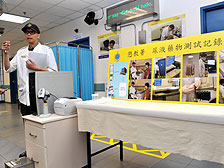 Reliable results:  The Correctional Services Department briefs the media on the taking of inmate urine tests