CSD's 60th anniversary Autumn Fair to be held this Saturday

The Correctional Services Department's annual Autumn Fair will be held in Stanley this Saturday (November 3).

The Autumn Fair, which is organised by the CSD's Sports Association, enters its 60th year and has been a large-scale and popular public event since its establishment in 1953. The theme of this year's "Jubilee Fair" is "Celebrating 60th Anniversary: Supporting Charity; Building Harmony with One Heart", which highlights the role of the event as a platform for co-ordinating the efforts of staff, inmates, business organisations, community bodies and members of the public in raising funds for the community over the past 60 years.

Celebrating the Jubilee Fair, the 60th Autumn Fair Organising Committee has arranged some innovative and special programmes for visitors in a bid to raise more funds for those in need.

The new features include the first-ever "Charity Canteen", which will serve four kinds of meals normally provided for inmates, a sale of limited edition souvenirs and display panels showing the different facets of the Fair.

Apart from the games stalls and sale of various products made by inmates, the Fair also features a rich entertainment programme including dragon and lion dances, guard dog training demonstrations, marching bands of correctional institutions, performances by the Civil Aid Service as well as newly added programmes such as a handbell ensemble, jazz dance and cheerleading performances by community and education groups. The colourful events are meant to fulfill the traditional spirit of the Fair in "Working Together, Participating by all".

After deducting costs, the funds raised from sales and donations through various channels in the Fair will go to more than 40 voluntary agencies and beneficiaries for charity purposes, including inmates' welfare services. The charity event also provides opportunities for inmates to contribute to the community.

The fair will run from 11am to 5pm at the Football Field next to Stanley Prison (99 Tung Tau Wan Road). Members of the public are welcome to share the fun and contribute to charities.  Admission is free. 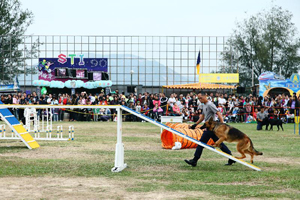 The Correctional Services Department Dog Unit presents a demonstration at the Autumn Fair. 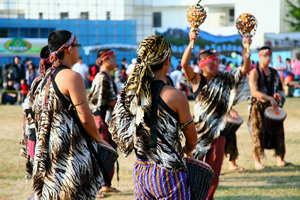