The Correctional Services Department (CSD) today (December 12) carried out an emergency exercise to test the emergency response of its various units to a simulated hostage-taking situation inside the Lo Wu Correctional Institution (LWCI).

Code-named Concord XIII, the three-and-a-half-hour exercise tested the command and communication capabilities of the department during an emergency, the implementation of contingency plans at different levels, the departmental response and information dissemination.

The Hong Kong Police Force (HKPF) and the Fire Services Department (FSD) also participated in the exercise to test the CSD's co-ordination with the two departments when requests for assistance and logistics support were made from correctional institutions in the area.

The exercise featured a number of different scenarios including medical emergencies, hostage-taking and fire breakouts.

More than 200 staff members of the CSD, the HKPF and the FSD took part in the exercise.

Mr Woo said the exercise provided an opportunity for the department to test the readiness and effectiveness of its emergency response and whether its command orders are proper and timely, as well as examine its co-ordination and co-operation with relevant parties.

He said, "I can see that every member of the exercise has made great efforts to face the challenge with professionalism, providing immediate response and keeping the operation of the institution smooth."

He said the exercise would enhance the response capabilities and professionalism of front-line staff, as well as the inter-departmental communication in the event of a crisis. The department remains focused on maintaining a highly committed, motivated and professional workforce through its strategic development and staff training.

"In view of the rising expectations of the public, the work of correctional staff is becoming increasingly demanding. I am confident that as professionals we will continue to do our best to help maintain Hong Kong as one of the safest cities in the world."

Mr Woo added that an assessment and debriefing would be conducted to review the response plan and communication flow of this exercise so as to further improve the handling of crisis management.

The CSD holds regular emergency exercises of various natures and on different scales including institutional, regional and departmental levels to enhance the capabilities and efficiency of its staff in responding to crisis and emergency situations. 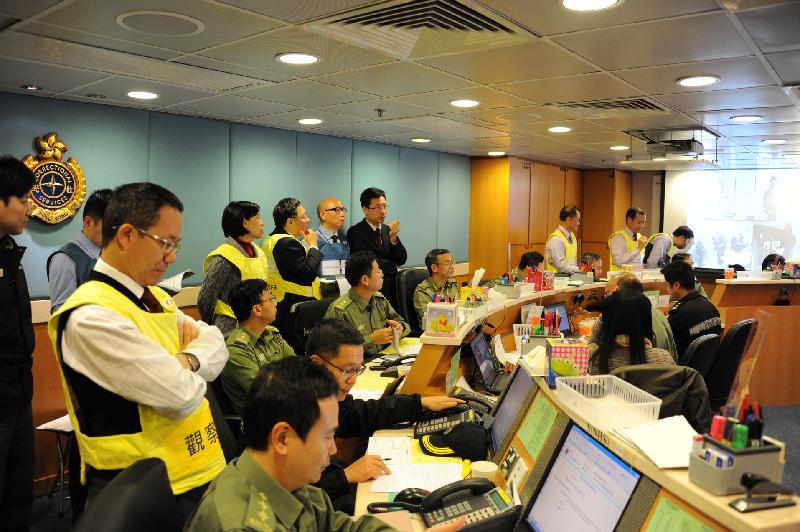 The Correctional Services Department today (December 12) carried out an emergency exercise to test the emergency response of its various units to a simulated hostage-taking situation inside the Lo Wu Correctional Institution. Photo shows the department's Central Control Centre in operation during the exercise.