About 530 primary-six and form-one students, teachers and social workers from 20 schools today (January 23) joined the Student Forum of the Rehabilitation Pioneer Project (RPP) to explore the topics of youth drug abuse and rehabilitation.

The forum, which seeks to encourage respect for the rule of law, drug-free living and support rehabilitation work for inmates, also aims to deliver positive messages to young people and inspire them to become "rehabilitation pioneers".

During one-and-a-half-hours of discussion activities participants from eight secondary and 12 primary schools joined an interactive session titled "Options in Life", during which they explored the importance of making the right decisions at critical junctures, and a sharing session in which inmates talked about their rehabilitation after going astray.

"As the issue of youth crime and drug abuse is a concern in our society, the Correctional Services Department (CSD) has, since the RPP implementation in 2008, held a series of community educational talks and visits to convey to young people the messages of combating crime, staying drug-free and supporting rehabilitation work," said the Assistant Commissioner of Correctional Services (Rehabilitation), Mr Tang Ping-ming.

"To further promote the RPP to students of different levels, the department organised three extension-training camps during July to August last year. In addition, the department, since December last year, has also successfully applied to include activities of various RPP programmes, such as meet-the-inmates sessions, visits to the Hong Kong Correctional Services Museum and public education talks, into the moral and civic education–related activities under the "Other Learning Experiences" of the New Senior Secondary Curriculum. Such a move not only helps promote the mission and vision of the RPP, but also helps youngsters who are interested in joining the CSD to further understand the work of correctional services.

"We hold educational talks at schools or organisations participating in the RPP and after each talk suitable participants are recommended by the responsible teachers or social workers to join a visit to a correctional institution, drug addiction treatment centre or the Hong Kong Correctional Services Museum," Mr Tang added.

"Participants who have completed the visit will be asked to give an oath indicating their commitment to becoming a rehabilitation pioneer and support rehabilitative work," Mr Tang said.

Mr Tang said he was pleased to see positive feedback, as many participants wrote to correctional institutions expressing their support for and acceptance of rehabilitated offenders. He thanked NGOs and schools for their concerted efforts and support for rehabilitation work, which helps offenders to reintegrate into society.

Officiating at today's forum was the Chairman of the Board of Directors of Sik Sik Yuen, Mr Wong Kam-choi. The event also obtained support from the Advisor of the Subsidised Primary Schools Council, Mr Cheung Yung-bong; Chairman of the Hong Kong Subsidised Secondary Schools Council, Mr James Lam, and representatives of the District Fight Crime Committees. They joined the Commissioner of Correctional Services, Mr Sin Yat-kin, in launching the forum's opening ceremony. 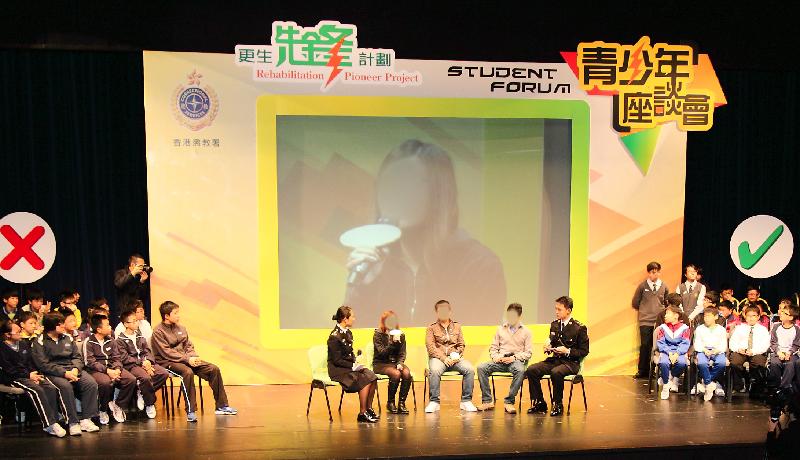 Students listen at an experience sharing session with rehabilitated offenders during the Student Forum of the Rehabilitation Pioneer Project today (January 23).