The Correctional Services Department (CSD) invited around 300 students from six secondary schools to attend the Rehabilitation Pioneer Project - A Drama and Music Performance of "Creation and Rehabilitation", the first event of its kind in a penal institution, at Stanley Prison today (April 10).

A spokesman for the CSD said that the aim of the activity was to enhance students' understanding of the diverse rehabilitation services of the CSD and the effectiveness of the services through the performances of persons in custody who were participants in the "Creation and Rehabilitation" Programme. It also provided students with a chance to understand persons in custody from another perspective so that they would be aware of the importance of offender rehabilitation and social inclusion and in turn render their support.

The spokesman added that the innovative activity would provide a platform to facilitate interaction between persons in custody and students. As ex-offenders, persons in custody could personally relate to the students the heavy price they had to pay for committing crimes and the importance of abiding by the law. Through their performances, they would be able to assist in the prevention of crime by promoting commitment to and belief in the rule of law, drug-free living and support for offender rehabilitation.

Jointly organised by the CSD and the Catholic Diocese of Hong Kong Lay Prison Evangelical Organisation, the "Creation and Rehabilitation" Programme was first introduced to Stanley Prison in August 2011. The project aims at integrating art therapy into rehabilitation services. Through their participation in the creative arts activities, persons in custody will learn how to pursue self-exploration, self-understanding, self-adjustment and self-realisation. They will also be able to build skills in communication, leadership, problem-solving, conflict resolution and respect for themselves and for others during the interactive learning process.

Ah Tat (pseudonym of a person in custody), one of the participants of the "Creation and Rehabilitation" Programme, remarked that his participation in the activities had helped him to enhance his positive spirit and learn the wisdom of living as well through teamwork. He felt extremely relieved and happy, and could appreciate the spirit of real trust, mutual acceptance and assistance among the participants.

Mr James Mark, a veteran performing arts practitioner, has been the volunteer adviser of the "Creation and Rehabilitation" Programme since its introduction. He said that drama would enable participants to feel relieved, carry out self-reflection, learn to understand themselves, be considerate to others and understand the importance of communicating with others through the performing process.

Mr Mark said, "With their engagement in creative arts, trainees can see hopes in their future, strive to achieve and wish to be recognised and appreciated by others. This is what motivates us to carry on with this programme."

The CSD launched the Rehabilitation Pioneer Project in September 2008 to promote anti-crime awareness, enhance understanding of the detrimental effects of drugs and disseminate the message of supporting offender rehabilitation among young people.

About 300 students from six secondary schools experienced the first Rehabilitation Pioneer Project - A Drama and Music Performance of "Creation and Rehabilitation" at Stanley Prison today (April 10). Through the performance, inmates enhanced their positive spirit and learnt the wisdom of living and teamwork. Photo shows inmates performing the drama. 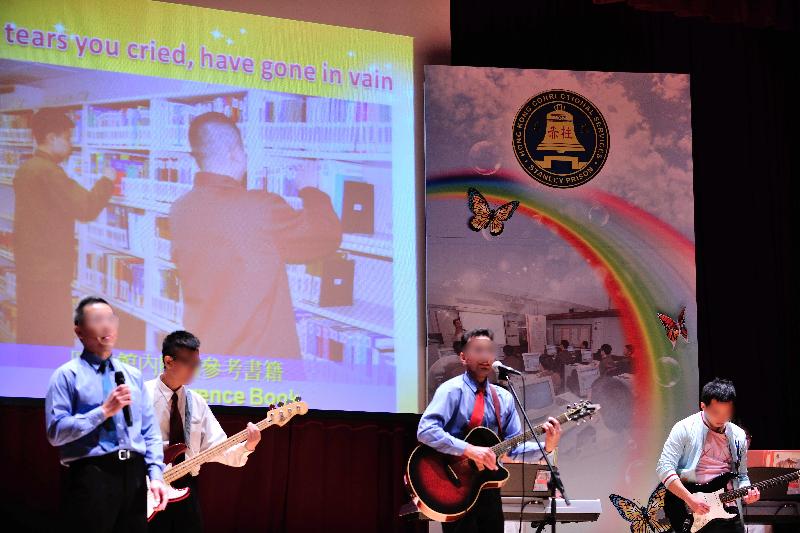 The inmates perform a song written by themselves, entitled "Let your love lead your life". 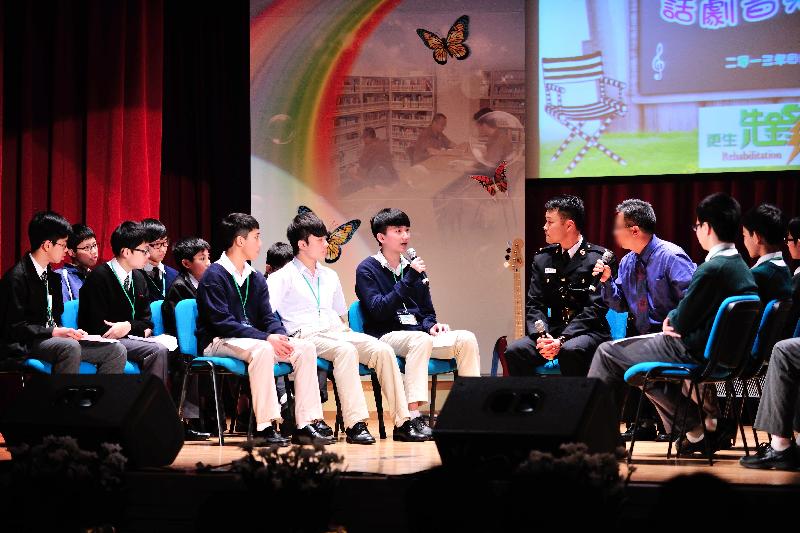 The students listen to sharing by rehabilitated offenders to enhance their belief in the rule of law, drug-free living and support for rehabilitation work for inmates.