Speaking during a passing out parade at the department's Staff Training Institute, Mrs Lam said, "The Department has placed dual emphasis on correction and education. As a matter of fact, discipline requirements and rehabilitation support are integral to penal institutions and they are of equal importance. Indeed, striking a fine balance between them is no easy task."

Mrs Lam said that in the period from the former Prisons Department prior to 1982 to the present Correctional Services Department, the Department had moved with the times and undergone significant changes. It had endeavoured to maintain discipline in penal institutions by providing a secure, safe and humane environment and to offer a decent and healthy environment for persons in custody. In recent years, the Department had collaborated with the community and other agencies to help persons in custody embark on the road to rehabilitation.

She pointed out that the CSD has strived to provide market-oriented vocational training for persons in custody in recent years to facilitate their smooth reintegration into society after release. For example, the Department had collaborated with the Construction Industry Council to offer two new courses, Timber Formwork Skills and Bar Bender and Fixer Skills, at Tong Fuk Correctional Institution and Tai Lam Correctional Institution respectively this year. The courses aim to upgrade the employability of persons in custody so that they may contribute to the development of the community in future.

Mrs Lam also commended the proactive efforts made by the CSD to encourage persons in custody to quit smoking, both for their own well-being and in a bid to improve the working environment of staff. With the hard work and guidance of staff at Tung Tau Correctional Institution for nearly one year, a total of several hundred inmates of the institution were willing to abstain from purchasing cigarettes and smoking, with many even making up their minds to quit smoking. Tung Tau Correctional Institution was officially designated as the first "Smoke-free Penal Institution" for adult persons in custody in Hong Kong in January this year.

Turning to environment protection work, Mrs Lam noted that the Department had implemented a Waste No Food programme on a voluntary basis at Lo Wu Correctional Institution in April this year to encourage the female persons in custody to waste less food by reducing their rice consumption. Since the launch of the programme, enthusiastic responses were received from more than 700 participants, representing two-thirds of the penal population of the institution. As one of the signatories to the Food Wise Charter, the Department plans to install food waste processors at penal institutions to actively promote reduction of food waste and contribute to environmental protection.

On community education, Mrs Lam said the CSD has made use of various activities under the Rehabilitation Pioneer Project, including educational talks, the Personal Encounter with Prisoners Scheme, youth forums, and visits to the Hong Kong Correctional Services Museum to educate young persons to lead a law-abiding and drug-free life. In April this year around 300 students from six secondary schools were invited to attend the first ever drama and music performance by persons in custody at Stanley Prison. Through the inmates' performances and sharing, the students gained a better understanding of the serious consequences of committing crimes, thus promoting anti-crime awareness and conveying the message of supporting offender rehabilitation.

Commending the correctional services as an outstanding disciplined force with caring staff members, Mrs Lam said the Oi Kwan Volunteer Group, which comprises CSD staff members, had dedicated itself to charitable activities over the years. The volunteer group had also been presented with the Caring Organisation Logo for the seventh consecutive year by the Hong Kong Council of Social Service, which fully reflected the SAR Government's vision for "A Caring Society and a Home to the People".

She also encouraged the graduating staff to have passion, commitment and empathy when they discharge their duties. 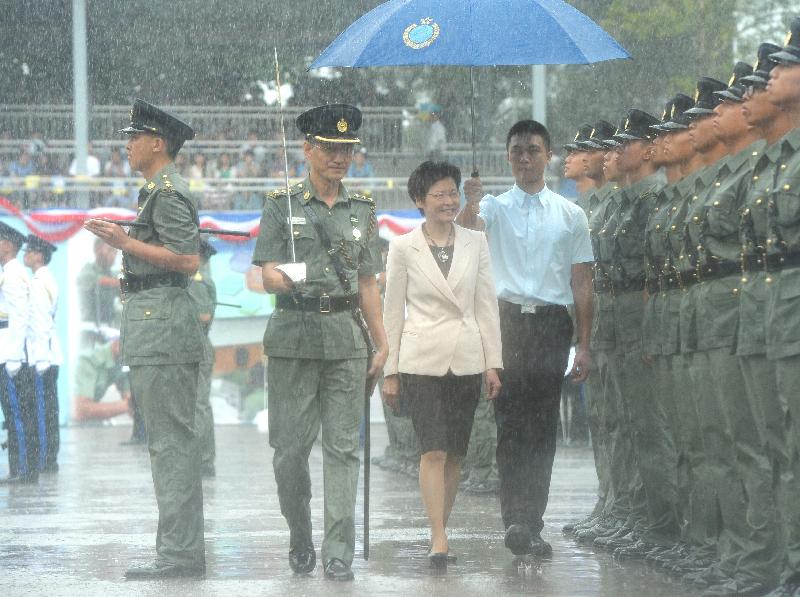 Mrs Lam inspects a contingent of correctional officers at the passing-out parade at the Staff Training Institute of the CSD today. 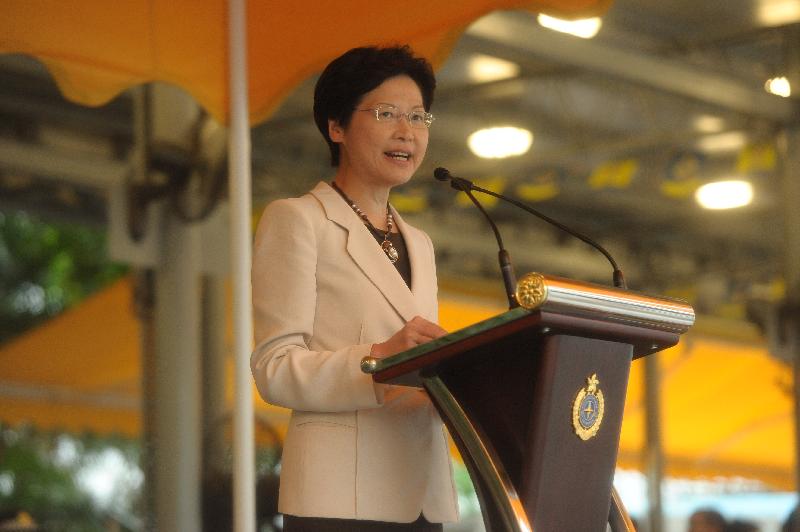 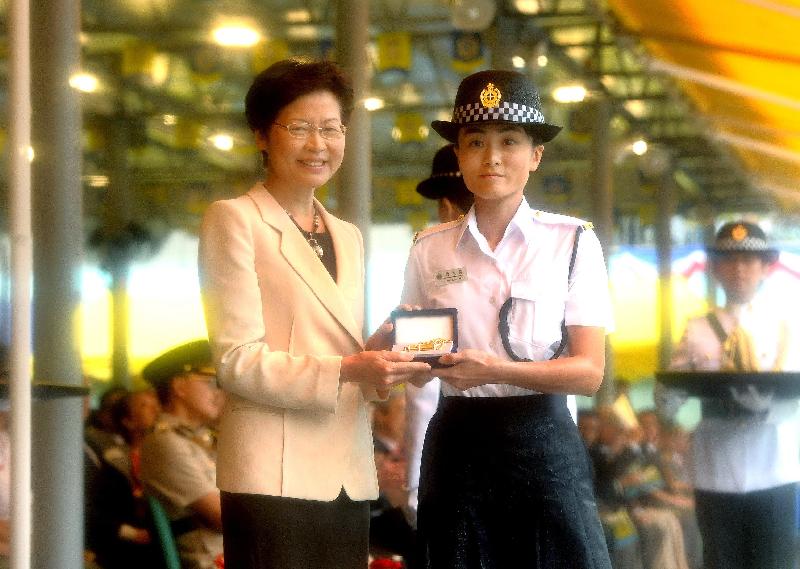 Mrs Lam presents the Best Recruit Award, the Golden Whistle, to Assistant Officer II So Sau-wah of Training Course No. 441.