Over 70% of the Lo Wu Correctional Institution population has participated in the Waste No Food Scheme since April, seeing 12,500 bowls of rice saved each month. (Video)

The Correctional Services Department said today the project enhances environmental awareness among inmates and encourages them to reduce their leftovers on a voluntary basis.

Upon enrolment, inmates are issued with a reduced portion of their staple food, including rice, chapatti and potatoes, to reduce leftovers in meals.

Inmates of different ethnic and cultural backgrounds participating in the scheme share the same values of environmental protection and community caring, while demonstrating behavioural changes in reducing food waste, the department said.

Inmate Maureen (alias) said the scheme is meaningful because there are a lot of people who face hunger every day.

Correctional Services Department Acting Chief Officer Lee Mei-ling said the scheme not only changes inmates’ attitude in the institution, it also alters their long-term attitude in reducing food waste when they rejoin society.

More than 40,000 bowls of rice, 100kg of potato, and 200 pieces of chapatti have been saved at the institution since April, representing a monthly carbon-dioxide emission reduction of 470kg.

The institution has installed a food waste decomposing system, with a daily capacity of 100kg, to recycle waste into useful compost. The waste includes peels, leaves, and fat. The organic compost is used for greening purposes.

The department will consider extending the scheme to other correctional institutions. 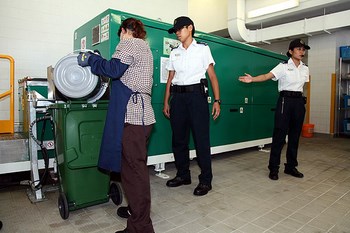 Re-use:  Lo Wu Correctional Institution now has a food waste decomposing system, with a daily capacity of 100kg, to recycle waste into compost.