Twelve inmates were presented with certificates for the Bar-bending and Fixing Skill Course at Tai Lam Correctional Institution (TLCI) today (October 23). Officiating at the presentation ceremony, the Director (Training and Development) of the Construction Industry Council (CIC), Mr Charles Wong, commended inmates' efforts in preparing for work in the construction sector after release.

"In view of the labour shortage in the sector, the Correctional Services Department (CSD) has organised the Bar-bending and Fixing Skill Course and Tong Fuk Correctional Institution (TFCI)'s Timber Formwork Skill Course. These courses not only help the construction industry train new blood, but also provide promising employment opportunities for rehabilitated persons," Mr Wong said at the ceremony.

He said that the CSD and the CIC have been jointly organising a number of construction-related vocational training courses and intermediate trade test courses, including the Painting and Decoration Course as well as the Intermediate Trade Tests for Concreter, Metal Worker, Joiner, Plumber, Refrigeration/Air-conditioning/Ventilation Mechanic and Electrical Wireman.

Superintendent of the CSD Mr Edwin Ko said that the Bar-bending and Fixing Skill Course was the first of its kind jointly organised by the department and the CIC. To cope with demand in the construction labour market, the course immediately followed the Timber Formwork Skill Course at TFCI so as to provide much-needed talent for the industry, in addition to facilitating smooth reintegration of the inmates into society after release.

Among the graduate inmates is Ah Kin (not his real name), who will be released by the end of this month. He said he would try to find a job in the construction sector as his friend's father is also working in the trade. Noting that workers in this field are considerably well paid and adding that the 10 major infrastructure projects would create jobs, he said he believes he would have many opportunities to earn a living and turn over a new leaf. 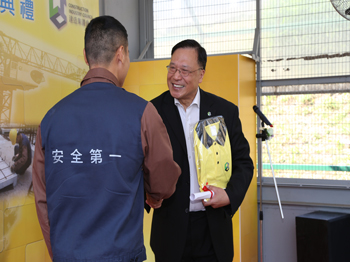 Twelve inmates were presented with certificates for the Bar-bending and Fixing Skill Course at Tai Lam Correctional Institution (TLCI) today (October 23). Photo shows the officiating guest, the Director (Training and Development) of the Construction Industry Council (CIC), Mr Charles Wong, presenting a certificate to one of the inmates. 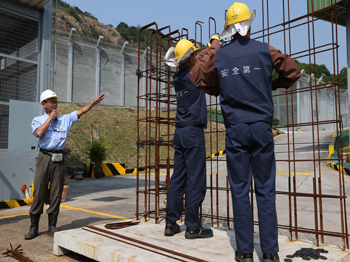 Two inmates demonstrate bending of bars for fixing a structural wall in a mock-up flat in the construction site. 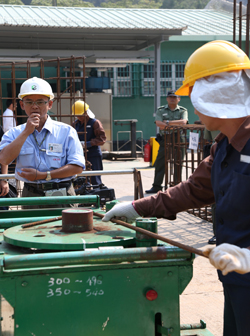 Under the supervision of an instructor of the CIC, an inmate demonstrates the operation of a bar bending machine.